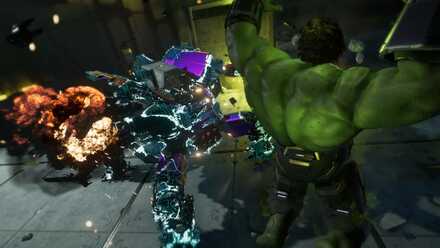 This is a guide to building Hulk in the Marvel's Avengers game. Know more about the best attributes, best gear perks, and best early game skills for Hulk below!

This build will focus more on buffing up Hulk through his Heroics extending the duration, and charging up quickly. It will also focus on abilities and upgrades that will help with survivability, something Hulk will need with how much damage he will be taking.

Hulk's best attacks are his melee attacks and will greatly benefit from increase melee damage from Might. Valor is another great stat to have to increase the damage of his Ultimate and Assault Heroics and increase the critical damage of his attacks. Resolve will be one of the most important stats to have with Hulk as he will be hit a lot with his Support Heroic and because of his larger hitbox.

In this build, it is a great idea to increase your critical chance as it will make your Boneshaker even stronger when it is activated. Having Hulk specific perks that increase his Boneshaker effectiveness is ideal.

If you can not get those Boneshaker perks, you should focus on survivability perks as Hulk can end up taking lots of damage. Hulk is bigger than the other Avengers and can feel like an easier target most of the time. Making him as tanky as possible and that won't be a problem anymore and will allow you to focus on attacking more.

Hulk's basic ranged attack is slow and not as effective as you would like, getting the Power Attack version wil make his ranged combat better. The rest of the upgrades you should get are his other Power Attacks. Smackdown can increase your damage output and lets you grab two enemies, letting you deal with damage to more enemies at once.

Cataclysm is great to get as soon as possible at Level 15 as it will further increase Hulk's damage output when Overcharged.

This is one of the more flexible Artifacts, fitting in most builds. This Artifact will give you survivability with Willpower orbs, and offensive ability with the Intrinsic and Heroic orbs. This is great to have in this build as you will want both WIllpower orbs and Heroic orbs to continue surviving and dishing out damage.

Register as a member and get all the information you want. (It's free!)
Login
Opinions about an article or post go here.
Opinions about an article or post
We at Game8 thank you for your support.
In order for us to make the best articles possible, share your corrections, opinions, and thoughts about "Best Hulk Build" with us!
When reporting a problem, please be as specific as possible in providing details such as what conditions the problem occurred under and what kind of effects it had.