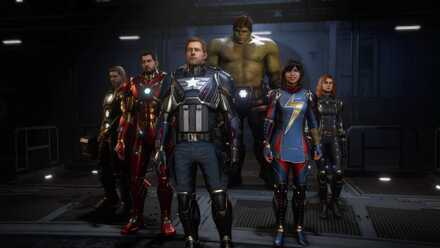 A balanced team with abilities that have good synergy with each other. We recommend setting your strike team with these heroes for a clean run even on the most difficult missions. While it is hard to say that any one character is truly the best character, we think that this team would essentially give you the best characters to work with.

Black Widow's Veil of Shadows can set an ambush or straight up beat every enemy senseless in the middle of the battle. Excellent for both offense and defense, this Heroic ability is borderline busted. For our walkthrough team, Black Widow seemed like the clear winner for best character.

Ms. Marvel will be your tank as she has the best regenerative ability in the team and can heal or revive others using Healing Spirit. If she or any team member is capable of dropping Heroic Orbs, Ms. Marvel can basically spam her healing ability to prevent anyone from being downed.

Iron Man can snipe enemies from above or by moving quickly between safe spots using Flight. His ranged attacks are unparalleled and can be switched depending on the current situation. He can still participate in melee combat and wreak havoc using the Hulkbuster Ultimate Heroic ability. With Iron Man's extreme versatility through repulsors, rockets, and lasers, he was our pick for runner-up best character.

Black Widow can perform combos better than any other hero in the game. You can grapple to far enemies and send a flurry of quick attacks then grapple to other enemy or dodge to prepare another combo. Her outstanding speed and combo potential is what led us to choose her as best hero.

Her intrinsic ability allows her to deal increased damage during overcharge. To enter this state, you must completely fill her Shadow Ops meter by attacking enemies without taking damage, and her Veil of Shadows ability is perfect for doing it. If you could use this ability while Power Surge is active, you couldy possibly wipe out an entire group of enemies untouched.

Iron Man can choose between 3 ranged attacks to cover any situation. Repulsors and Lasers go well with single targets, with the latter working more effectively against slow enemies, while Rockets go well with multiple targets. This makes his ranged attacks the most reliable compared to other heroes in the roster.

Unibeam can erase enemies (even bosses) quickly especially when boosted with Omega Beam and Concentrated Fire specializations. You can raise the damage even further by unlocking the Overcharged Blast upgrade.

His Hulkbuster Ultimate Heroic ability also has one of the best ranged attacks in the game. The Magno-Missile upgrade deals a burst of insane damage against up to 5 enemies (8 with Magno-Missile Barrage). If you are worrying about your intrinsic energy when using this skill, you can choose the Energy Star specialization or any Intrinsic Ability upgrades from the Mastery category.

Captain America's Shield Throw is very powerful when fully upgraded. It can bounce to multiple enemies and perform a combo finisher with Patriot's Throw to deal heavy damage. What makes it significant is that this combo deals so much damage in a short time without consuming anything.

These are the heroes with the best Support Heroic abilities as they can buff the whole team in one cast.

In addition to her awesome combo game, Black Widow's Veil of Shadows gives every nearby ally temporary invisibility. This leaves enemies open for attacks for until the buff expires. If your team can dish out enough damage, you can wipe out a horde in one burst.

You can increase the invisibility duration with Visus Obscuram for teammates or Shadow Walker for Black Widow only but we recommend getting Shadow Gifts instead so you can spam Veil of Shadows.

Ms. Marvel's Healing Spirit restores her willpower as well as her allies'. This ability can even instantly revive a downed ally while also restoring their willpower with Team Spirit. Choosing the Will to Live and Will to Fight specializations is a safe option for more healing charges especially in more difficult missions.

Ms. Marvel's Embiggen increases her damage and gives her immunity to status effects. What makes her a great tank other than the status immunity is the Doctor's Orders specialization which gives a 25% chance to drop a Regen Pack for every kill while Embiggen is active. Unlock the Walking Tall upgrade to increase recovery rate from all sources while Embiggened.

Fists of Glory is also a great specialization as you can basically spam Embiggen if you picked up enough Heroic Orbs from your kills.

Hulk can draw enemy attention away from his allies using Boneshaker, which is a good asset for a tank role especially when you're in a team. Since getting attacked builds up Rage, taunting enemies is the best way to fill your Rage meter which can also decrease damage received, restore willpower, and increase recovery rate.

Who Is The Best Character? (Poll)

Jump to the Comments (5)

In order for us to make the best articles possible, share your corrections, opinions, and thoughts about 「The Best Characters and Best Strike Team | Marvel's Avengers」 with us!