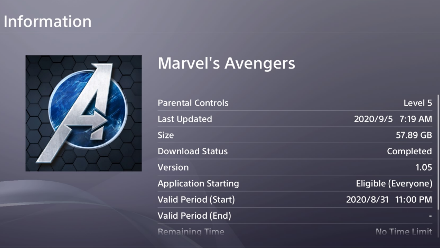 Marvel's Avengers is now released worldwide! With intense graphics and online multiplayer capacity, this guide will tell you how much space the game takes up on your device.

The game itself is roughly about 50 GB, more updates will be coming in the next few weeks/months (with a promised Spider Man, Hawkeye, and Kate Bishop DLC characters already confirmed). So, freeing up more than that is definitely recommended! While each system will have slightly different specs, it seems that most systems will need about 75GB to contain the base game and updates (including future updates).

Previously released updates are all shown in the article below:
Version 1.05 Patch Notes and How to Update

For PS4, the recommended free space is at least 75 GB. The first week of September alone included two updates amounting to almost 10 GB. With more updates already promised, it's safe to say you are going to need more than just 50 GB!

For XBox, the recommended free space is also at least 75 GB in anticipation of all the new DLC announced by Square Enix.

As per the recommendations of Square Enix, PC users need to free up at least 75 GB in order for them to play the game. However, they highly recommend freeing up more than that. They suggest freeing up at least 110 GB, perhaps in preparation for the DLC they have already announced.

In order for us to make the best articles possible, share your corrections, opinions, and thoughts about 「Game Size | How Much Space Does Marvel's Avengers Take? | Marvel's Avengers」 with us!