Nick Fury is the enigmatic Director of SHIELD, but is nowhere to be found after the events of A-Day. Read on to learn more about him and where he may be!

Who Is Nick Fury?

Nick Fury is the director of SHIELD, and in turn, a close ally of the Avengers. He acts as the liasion between SHIELD and the Avengers.

In-game, he appears in the starting level, I Want To Be An Avenger, being interviewed by the Daily Bugle, and in video form in the Missing Links mission, where he entrusts Kamala and Hulk with SHIELD Protocols.

Where Is Nick Fury? 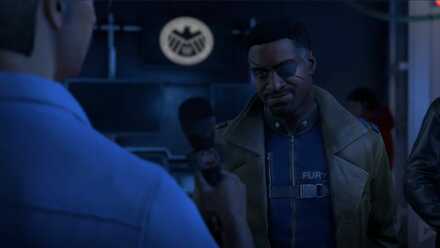 Nick Fury was first seen in A-Day, being interviewed by Phil Sheldon about the Chimera's reactor.

Afterwards, he becomes missing, even from SHIELD. This left Maria Hill in charge of SHIELD's remnants. However, he did leave a message for the Avengers in the Missing Links mission, instructing them to give SHIELD protocols to either Maria Hill or Dum Dum Dugan.

Will He Ever Reappear?

With Nick Fury being such a central and iconic character of the Avengers franchise, it's hard to imagine he won't make any more appearances.

The upcoming story DLC featuring Hawkeye and Kate Bishop entitled Taking AIM has the duo investigating what happened to Fury following the events of A-Day. It may be there where we meet Nick Fury again, or where we find more clues as to what happened to him.

In order for us to make the best articles possible, share your corrections, opinions, and thoughts about 「What Happened To Nick Fury? | Marvel's Avengers」 with us!