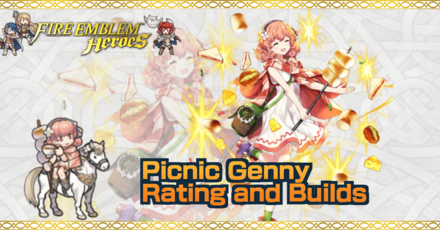 This is a ranking page for the hero Genny - Dressed with Care from the game Fire Emblem Heroes (FEH). Read on to learn the best IVs (Individual Values), best builds (Inherit Skill), weapon refinement, stats at Lv 40, and more for Picnic Genny.

The best IVs for Picnic Genny are +Def and -Spd. A higher Spd stat allows her to survive more encounters, as she gets harder to execute follow-up attacks on. If she takes Spd as a boon, she can reach 28 Spd at Lv. 40. With her poor Def stat, she isn't really cut out for tanking physical damage, so it is best if you take it as a bane.

If you are stuck with a +Atk IV, or you want a combat healer, you can opt to build it as well since Wrathful Staff allows Picnic Genny to a decent amount of damage for a staff unit.

Picnic Genny is a ranged magic attacker (range = 2). Therefore, when not accounting for the Weapon Triangle, the amount of damage she deals will be equivalent to her Atk minus the foe's Res stat.

Toasty Skewer+ grants +3 Def/Res to any ally within 2 spaces that is attacked by an enemy. It is pretty easy to trigger when taking into consideration its range of 2 spaces. In combination with Physic+, Picnic Genny is able to support her allies from a distance, possibily even outside the danger zone if terrain and her allies' positioning serve her well.

Fireflood Balm+ only has a cooldown of 1! You can almost always use it in every turn. It grants a +6 Atk/Res buff to the allies you heal for 1 turn. It is pretty easy to utilize and integrate into strategies, but it does not stack with other buffs such as Atk Tactic.

Can Buff Regardless of Position

Def Opening 3 grants +6 Def to the ally with the highest Def stat on the map, regardless of Genny's position in relation to that ally. This makes her a great support unit for high Def powerhouses such as Idunn or Caineghis.

Picnic Genny takes 1.5x damage from cavalry-effective weapons like Ridersbane, and with her poor Def stat, one blow from this type of weapon is sure to take her down. Make sure you know what weapons you are up against before hopping too far into the line of battle!

Genny - Dressed with Care Only Appears as a 5 Star Hero!

Picnic Genny as a Source Hero

Picnic Genny can be used to inherit the skills Wrathful Staff 3 and Toasty Skewer+. However, Picnic Genny is a special hero that is only available at limited times. Think carefully before you fodder off Picnic Genny, or at least try to pull a duplicate first.

How to Get Picnic Genny / Illustrations / Voice Actor / Quotes

How to Get Picnic Genny

Picnic Genny is a limited time Hero who can be pulled from a Special Heroes Summoning Event. They do not appear in regular summons.

Register as a member and get all the information you want. (It's free!)
Login
Opinions about an article or post go here.
Opinions about an article or post
We at Game8 thank you for your support.
In order for us to make the best articles possible, share your corrections, opinions, and thoughts about "Picnic Genny Builds and Best IVs" with us!
When reporting a problem, please be as specific as possible in providing details such as what conditions the problem occurred under and what kind of effects it had.