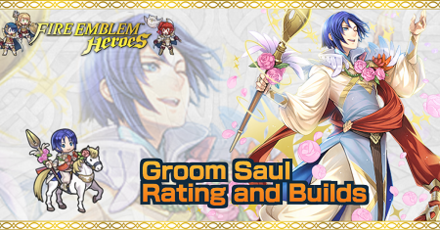 This is a ranking page for the hero Saul - Minister of Love from the game Fire Emblem Heroes (FEH). Read on to learn the best IVs (Individual Values), best builds (Inherit Skill), weapon refinement, stats at Lv 40, and more for Groom Saul. 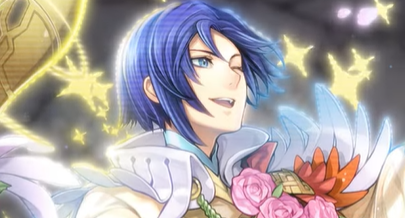 This build takes advantage of the extra movement provided by S/R Far Trace 3. With the Dazzling refine on Flash+, he can attack without fearing a counterattack and retreat to safety. You can als opt to give him Wrathful Staff on his B slot to further increase his firepower.

This build a budget build aimed to give Groom Saul minimal skill inheritance. Groom Saul does not have any way to recover his own HP, so Renewal 3 works rather well to help with that. Alternatively, you can give him Live to Serve as a Sacred Seal in order to free up his B slot for other skills.

Groom Saul is a ranged magic attacker (range = 2). Therefore, when not accounting for the Weapon Triangle, the amount of damage he deals will be equivalent to his Atk minus the foe's Res stat. However, as he uses a staff, his damage would normally be halved without a Wrathful Staff effect. 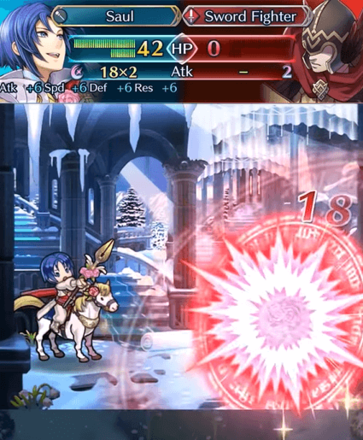 The +6 buffs are seen above.

Observant Staff grants the following effects to Groom Saul when within 3 spaces of a support-partner pair:

Given the AoE, and with some planning, this effect is pretty easy to trigger. Aim to keep this on at all times to make sure Saul is at a stat advantage against his foes.

C Duel Cavalry 4 is a special skill that treats the unit’s stats as 175 in the Arena, allowing your overall score to increase when using Groom Saul. It is usable by any colorless cavalry unit, so equip it and increase your score as you would like, but keep in mind that as an A slot skill it means you will lose the ability to useful, powerful A skills like Fury 4 or Death Blow 4.

Because it is an upgrade from C Duel Cavalry 3, it also gives Atk/Spd/Def/Res +2 on top of the original +5 HP.

With Return+, Groom Saul can heal and neutralize status conditions like Panic and Threaten in one turn.

Odd Recovery 3 also provides heals and neuralizes any 【Penalty】 on allies within 2 spaces of Groom Saul every start of odd-numbered turns. This makes Groom Saul a great unit in Aether Raids as debuffs are very common in that game mode and his mobility definitely helps him shine in this game mode.

Additionally, he also has the ability to boost allies' Spd/Res by +6 through Deluge Balm+.

High Res makes him a good tank against magic

Groom Saul comes with high Res, which will make him a good tank against units using magic. He can push his Res even higher because of the effects of Observant Staff+, though you will need to have him with two other allies that are in Ally Support in order to activate this.

Observant Staff is a bit underwhelming

Though it is non-exclusive an can be fodderred off to other units! To fix the 2nd issue, Saul's B slot is unoccupied by default if you need a Dazzling or Wrathful effect.

While he's a good support, Groom Saul needs to be placed in a specifc team composition that includes two allies that are in Ally Support with each other in order to activate his weapon.

This makes him effective only in certain teams and he's not flexible to be on any team unless you give him another weapon.

Groom Saul has very low Def, which means that units with high attack and use physical damage weapons will be able to defeat him easily.

Units like Ninja Lyn or Legendary Leif who have brave weapons are the most reliable in taking out Groom Saul.

But since he doesn't have Close Counter, any other physical damage melee unit should be able to deal with him.

While C Duel Cavalry 4 does give some nice stats, the A skill can be home to very powerful skills that are cornerstones for great builds. If you plan to use Groom Saul outside of the Arena, make sure to get him an A skill that allows him to perform better in maps.

Groom Saul takes 1.5x damage from cavalry-effective weapons like Ridersbane or a Wolf weapon like Rauðrwolf+, and one blow from this type of weapon is sure to take him down. Make sure you know what weapons you are up against before hopping too far into the line of battle!

Saul - Minister of Love Only Appears as a 5 Star Hero!

Groom Saul as a Source Hero

All of Groom Saul's skills have inheritance value!

How to Get Groom Saul / Illustrations / Voice Actor / Quotes

How to Get Groom Saul

Groom Saul is a limited time Hero who can be pulled from a Special Heroes Summoning Event. They do not appear in regular summons.

Register as a member and get all the information you want. (It's free!)
Login
Opinions about an article or post go here.
Opinions about an article or post
We at Game8 thank you for your support.
In order for us to make the best articles possible, share your corrections, opinions, and thoughts about "Groom Saul Builds and Best IVs" with us!
When reporting a problem, please be as specific as possible in providing details such as what conditions the problem occurred under and what kind of effects it had.