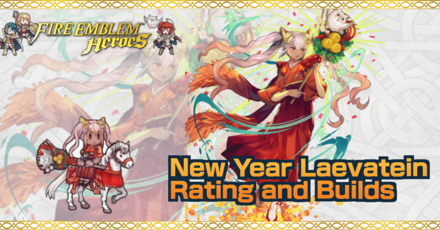 This is a ranking page for the hero Laevatein - Kumade Warrior from the game Fire Emblem Heroes (FEH). Read on to learn the best IVs (Individual Values), best builds (Inherit Skill), weapon refinement, stats at Lv 40, and more for New Year Laevatein.

The best IVs for New Year Laevatein are +Atk and -Def. Because of Wrathful Staff 3, she will find herself in situations wherein it is best for her to attack an enemy. This IV will help her deal more damage. Balanced defensive stats are ideal for survivability so taking a -Def would be best for her.

Ironically, a +Def IV stat will fit her as well! Her Def is pretty high amongst staff users so if you prefer a healer-tank hybrid over a healer-attacker, you can go with this IV instead.

New Year Laevatein is a ranged magic attacker (range = 2). Therefore, when not accounting for the Weapon Triangle, the amount of damage she deals will be equivalent to her Atk minus the foe's Res stat.

Kumade+ has the effect of inflicting -5 Atk/Spd on the opponent with the highest Def at the start of every turn. This is very helpful for taking down bulky tanks. Another quirk of Kumade+ is that they affect enemies regardless of where New Year Laevatein is. A -7 Atk/Spd debuff that is always active cannot be underestimated.

Earthfire Balm+ grants a +6 Atk/Def buff to all allies regardless of range whenever Laevatein heals an ally. With a low cooldown of 1, you can easily grant your allies the +6 Atk/Def bonus most of the time.

Staff attackers have the drawback of having their attack power halved during combat, but with the default B skill Wrathful Staff 3, Laevatein is able to deal damage from her staff like normal weapons. This means Laevatein has the power to play both a support role as well as a long ranged attack role in your party.

New Year Laevatein takes 1.5x damage from cavalry-effective weapons like Ridersbane, and one blow from this type of weapon is sure to take her down. Make sure you know what weapons you are up against before hopping too far into the line of battle!
Heroes with Effective Skills

Since New Year Laevatein is a cavalry unit, she benefits from skills like Hone Cavalry. She is definitely a great option for a cavalry emblem healer because of Kumade+'s effects.

Cavalry emblems are a team composed of all-cavalry units!

Characters that can absorb magic attacks

New Year Laevatein's Def is good, but the same can not be said for her Res stat. To patch this weakness, you might want to pair her up with a unit that can tank magic units for her like Yune or Fallen Berkut.

Heroes that counter or exploit Kumade+

Idunn deserves a special mention in this section. She has very high defenses so it would not be uncommon for her to be targeted by Kumade+. Once she is targeted, her weapon skill neutralizes it and gives her buffs. This means that Kumade+ is a liability when Idunn is an enemy. Take note of your enemies skills and work around them with strategy!

Should you Unlock Potential for New Year Laevatein?

New Year Laevatein can be used to inherit Kumade+ or Wrathful Staff 3. Kumade is a very valuable weapon whose effects are very useful. Think carefully on who you fodder it off too.

How to Get New Year Laevatein / Illustrations / Voice Actor / Quotes

How to Get New Year Laevatein

New Year Laevatein is a limited time Hero who can be pulled from a Special Heroes Summoning Event. They do not appear in regular summons.

Register as a member and get all the information you want. (It's free!)
Login
Opinions about an article or post go here.
Opinions about an article or post
We at Game8 thank you for your support.
In order for us to make the best articles possible, share your corrections, opinions, and thoughts about "New Year Laevatein Builds and Best IVs" with us!
When reporting a problem, please be as specific as possible in providing details such as what conditions the problem occurred under and what kind of effects it had.