This is a guide to Stunfisk's Photodex entry in New Pokemon Snap (Pokemon Snap 2) for the Nintendo Switch. Here you can find out how to take one star, two star, three star, and four star photos for Stunfisk, and how to get a diamond star rating!

Where to Find Stunfisk

How to Get All Stars for Stunfisk

How to Take Stunfisk 1 Star Photo

To take a close-up photo of Stunfisk, proceed through the Beach (Day) course until you are almost to the teleportation point. You can find a Stunfisk that gets decently close to the player near the last third sand mound.

How to Take Stunfisk 2 Star Photo

To make Stunfisk charged with electricity, throw a Fluffruit at it. Make sure to take a close-up shot to achieve a 2 Star Diamond photo.

How to Take Stunfisk 3 Star Photo 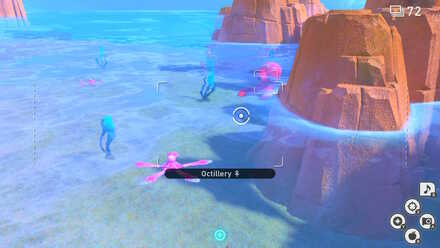 In the second area of Beach (Day), after taking the alternate route, you can find a Stunfisk hidden underwater in the sand in front of Octillery. After finding out where the Pokemon is hiding, use scan to make it reveal itself. 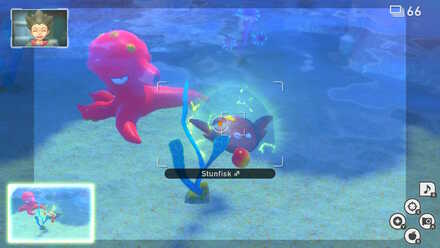 After revealing Stunfisk, toss a Fluffruit on top of the water above Stunfisk and wait for the fruit to sink. If the Fluffruit hits Stunfisk as it sinks, Stunfisk will release an electric shock. Wait for it to finish releasing its initial shock. A few moments later, it will release a second electric shock and this is when you take the photo.

Make sure not to include Octillery in the shot as this will not result in a 3 Star photo. This photo is similar to the one needed to fulfill the Hiding in the Sand request.

How to Take Stunfisk 4 Star Photo

In the final area of Beach (Day), you can find a lone Stunfisk on a small sandbank near the shore. Hit the Stunfisk with a Fluffruit and wait for it to finish releasing an electric shock. Once Stunfisk has calmed down again, hit it with another Fluffruit and take a photo as it flaps its fins and attempts to fly.

Register as a member and get all the information you want. (It's free!)
Login
Opinions about an article or post go here.
Opinions about an article or post
We at Game8 thank you for your support.
In order for us to make the best articles possible, share your corrections, opinions, and thoughts about "Stunfisk Locations and How to Get All Stars" with us!
When reporting a problem, please be as specific as possible in providing details such as what conditions the problem occurred under and what kind of effects it had.