Volcarona Walkthrough: How to Get All Stars | New Pokemon Snap (Switch) 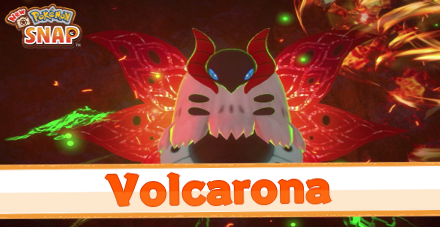 This is a guide to Volcarona's Photodex entry in New Pokemon Snap (Pokemon Snap 2) for the Nintendo Switch. Here you can find out how to take one star, two star, three star, and four star photos for Volcarona, and how to get a diamond star rating!

Where to Find Volcarona

How to Take Volcarona's Photo

1. Throw Fluffruits to Remove the Fire 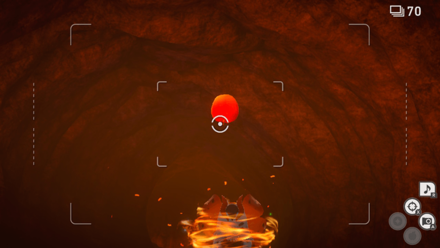 To take a photo of Volcanora, you need to throw a Fluffruit at it first to get rid of the fire. Aim slightly high to throw the fruit at a long distance.

The two Volcanora may sometimes stop in front of the Neo-One, giving you an opportunity to throw the fruit at close range. 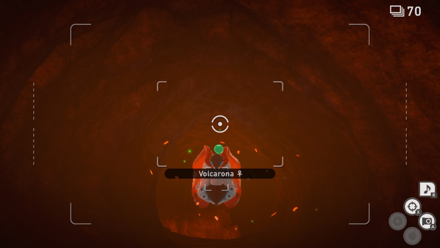 After removing the fire, throw an Illumina Orb at Volcanora to reveal the glowing patterns on its wings.

How to Get All Stars for Volcarona

How to Take Volcarona 1 Star Photo

Taking a 1 Star Photo of Volcanora requires some extra steps. First, you need to throw Fluffruits at it to remove the fire and then throw Illumina Orbs to reveal its glowing patterns.

Take a close-up photo of Volcanora to achieve 1 Star. You can get this photo even if the Pokemon is not in its illuminated state.

How to Take Volcarona 2 Star Photo

Taking a 2 Star Photo of Volcanora requires some extra steps. First, you need to throw Fluffruits at it to remove the fire and then throw Illumina Orbs to reveal its glowing patterns.

Take a photo of Volcanora showing off its wings near the cave's exit to achieve 2 Star.

How to Take Volcarona 3 Star Photo

For this photo, we recommend setting your camera to Burst Mode.

Set the Research Level to 2 and start the course. Throw a Fluffruit at the Volcarona on the left to ascend towards the alternate route.

As the Neo-One climbs up, wait for Volcarona to spin across the room. Take a photo of it while spinning across the area to get the 3 Star Photo. You can also get this photo even if the Pokemon is surrounded by the flames.

How to Take Volcarona 4 Star Photo

Taking a 4 Star photo of Volcarona requires a few steps to do. See the table below to learn how to get Volcarona's 4 Star Photo!

Register as a member and get all the information you want. (It's free!)
Login
Opinions about an article or post go here.
Opinions about an article or post
We at Game8 thank you for your support.
In order for us to make the best articles possible, share your corrections, opinions, and thoughts about "Volcarona Walkthrough: How to Get All Stars" with us!
When reporting a problem, please be as specific as possible in providing details such as what conditions the problem occurred under and what kind of effects it had.