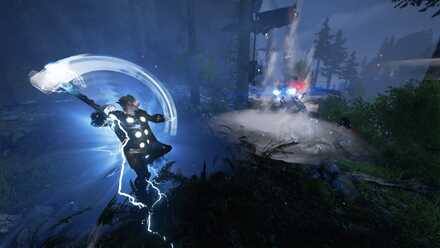 This is a guide to building Thor in the Marvel's Avengers game. Know more about the best attributes, best gear perks, and best early game skills for Thor below!

Thor's build will be focused on his Odinforce and Overcharging to get the most out of his abilities. While Overcharged, he will be able to use Odinforce without draining the Intrinsic meter, letting him use it for a longer period. His other abilities will increase in damage and gain added attributes like lightning that deal Shock damage while Odinforce is activated.

Might is going to be a must-have as most of your damage is coming from your melee attacks. Precision is not a must-have but will improve the damage of Thor's range attacks. Especially his AOE (area of effect) range abilities.
Valor is handy to have as Thor's abilities have a lot of Shock damage, increasing your chances of critical hits. Having increased critical damage can have your attacks melt enemy health

The best Gear Perks to have on Thor are those that add to his critical damage or chance. Those that can increase his Shock damage is also going to be useful especially when you have more

You will want to get Divine Chaos as early as possible as it will allow you to go into Overcharge. Overcharging is one of the most important abilities you will want to build around when playing as Thor. The rest of the Primary Skill upgrades are his best attacks.

Bring the Thunder is great when you are Overcharged while Hammer Spin and its upgrades make it an amazing melee combo to use on vulnerable enemies.

This Artifact is powerful with Thor as it can recover your Willpower and charge up both Heroic and Intrinsic meters. It will keep your Warrior's Fury up most of the time, allowing you to stay Overcharged even longer.

This is the base Artifact everyone will have and will always be useful. This will not do anything fancy but will increase your damage output.

Thanks, for the build! What about the resolve or resilience? I mean should have a little bit deffense or may I wrong :D

Register as a member and get all the information you want. (It's free!)
Login
Opinions about an article or post go here.
Opinions about an article or post
We at Game8 thank you for your support.
In order for us to make the best articles possible, share your corrections, opinions, and thoughts about "Best Thor Build" with us!
When reporting a problem, please be as specific as possible in providing details such as what conditions the problem occurred under and what kind of effects it had.