This is the story walkthrough for 5-2: Leechmonger Archstone in the Demon's Souls Remake (DS) for PS5. Keep reading for maps, tips on how to complete this stage, a list of NPCs, and items that can be found! 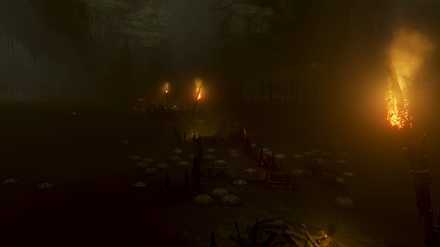 On your way down you'll see torches lighting your path which you should follow to stay safe. However, you'll run into Depraved Ones and Giant Depraved Ones at the end of this path, so you should try to avoid them by entering the swamp before you get there. You'll eventually get poisoned, but it isn't too strong, so as long as you have a good amount of Noble's Lotuses prepared you should be fine.

When crossing the swamp there's a bridge that would make things much quicker, but it's actually the more difficult path. Populating the bridge are Depraved Ones with long spears and Flies that if not taken care of carefully can ruin your day. More Depraved Ones can even pop up from behind alongside other sorts of traps. While the path below through the swamp may take longer, it's ultimately much less of a headache. 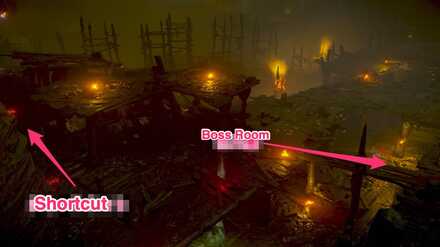 The boss room can be found at the end of a broken-looking bridge. You can head straight into the boss fight if you'd like, but there's actually a shortcut nearby that will make things easier for you in the future. Be sure to open it up before you go take on the Dirty Colossus.

How to Beat the Dirty Colossus

Don't Roll in the Swamp

Most of this area is made up of a swamp so keep in mind that if you roll you will get stuck and be unable to move momentarily. This is most likely to happen when you get surrounded by enemies and attempt to escape, but making this mistake will leave you vulnerable to getting struck down. Avoid rolling if possible but also try to stay away from any unnecessary fights as well.

While going through the swamp you'll find yourself poisoned quite often. While not exactly strong, it adds up over time so you'll want to rid yourself of it as soon as possible. Make sure you've stocked up with enough Noble's Lotuses to keep yourself nice and healthy.

Take Out Enemies So You Don't Fall

After you pass through the first fog door, choosing to take the upper path will put you in the line of fire from Flies and Depraved Ones. The pathways here are narrow, though, so if you don't deal with the enemies in front of you, you risk getting knocked off and falling to your death. The Depraved Ones can be especially annoying with their spears allowing them to hit from further away. Take things slow until you learn the layout better to make it through safely. 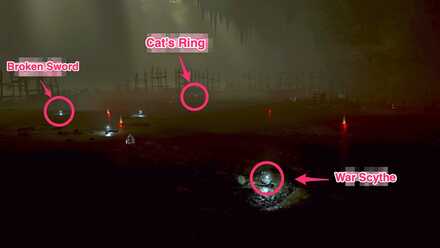 In the southern part of this area you can find the Cat's Ring. Equipping this will make it so you take less damage from falling, which can be incredibly useful in areas where it's easy to fall (such as this one). It can be hard to get to this part of the area without getting lost, however, so make sure you follow the torches that light your way to safely get to this item.

Getting the Large Sword of Moonlight

After the second fog door head towards where the building entrance is where you'll see a path going up. Follow this path to its end where you'll see a cluster of Slugs hanging. Hit them until they fall, then carefully drop down along the nearby platforms where the Large Sword of Moonlight will be waiting at the bottom.

Large Sword of Moonlight Upgrades and How to Get

Selen Vinland will only appear when the World Tendency is Pure White. To attain this, defeat Maiden Astraea at the end of the Dirty Colossus Archstone. With this done, you can accept her quest, where you need to kill Black Phantom Garl Vinland. Taking the Crest of Vinland that he drops to Selen will get you a Ring of Devout Prayer, but only if your Faith is 10 or above. If your Faith is below 10 she will give you a Dark Moon Grass instead.

Where to Find Selen Vinland

If your World Tendency is Pure Black, on the other hand, Selen Vinland's Black Phantom will appear instead. Killing her in Black Phantom form will get you the unique weapon, Blind. While not exactly the strongest weapon, it can deal damage through shields.

※1Only sold while in Soul Form ※2 Limited to 3

Post (0 Comments)
Opinions about an article or post go here.
Opinions about an article or post
We at Game8 thank you for your support.
In order for us to make the best articles possible, share your corrections, opinions, and thoughts about "5-2: Leechmonger Archstone Story Walkthrough and Map" with us!
When reporting a problem, please be as specific as possible in providing details such as what conditions the problem occurred under and what kind of effects it had.