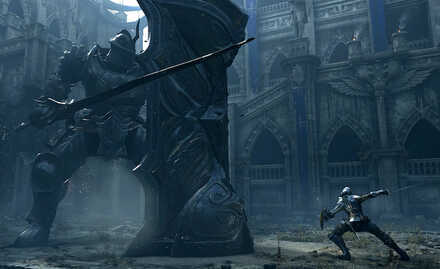 How to Beat the Tower Knight

One way to defeat the Tower Knight!

One Shall Fall Trophy Guide

First Take Out the Archers Above

There are several archers located above the boss area that will constantly attack you. It will become dangerous to fight the Tower Knight at the same time, so be sure to take them out first.

Attack his Legs Until he Falls, then Attack his Head

Make the Tower Knight fall by attacking his legs. Once he falls, attack his head to deal massive damage.

Beware When He Falls!

When the Tower Knight falls and you're on the area he falls at, you'll take massive damage. Make sure to not run behind him when he's about to fall!

Fight from Behind him when Attacking his Legs

When attacking his legs, try to fight from behind the Tower Knight as much as possible. If you fight from the front he will use a massively powerful shield attack that is very dangerous.

Soul Arrow on the Staircase

On the stairs that's connecting the ground and the path to the archers is a sweetspot where the Tower Knight will not be able to use melee attacks while also causing all his ranged attacks to miss. While in this area, the tower knight will also keep on moving around so you can wait for opportunities to snipe its head with a spell or an arrow.

To easily identify the spot, The area where the stairs begin (the one with the higher handrail) is the safest and you can climb slightly higher to attack with a ranged attack/spell.

In order for us to make the best articles possible, share your corrections, opinions, and thoughts about 「How to Beat the Tower Knight | One Shall Fall Trophy Guide | Demon's Souls PS5」 with us!