How to Beat the Vanguard | Demon's Souls PS5 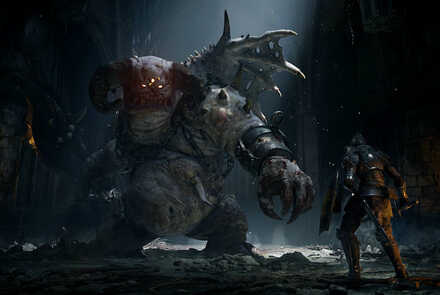 This is a guide on how you can beat the Vanguard boss in the Demon's Souls Remake for the Playstation 5. Read on to learn strategies, drops, and stats about the Vanguard.

How to Beat the Vanguard

One easy way to defeat the Vanguard by lowering his health from a distance!

The Vanguard can first be encountered in the tutorial level and again later in the Shrine of Storms 4-1 if you failed to kill it the first time. In both encounters, the boss will behave the same way. While the Vanguard's attacks deal massive damage, you will be relatively safe to attack it if you can get behind it. Stay right behind and attack its rear in order to take it down.

Watch for Its Jumping Attack

When behind the Vanguard, it will occasionally fly up into the air and drop down with a large slamming attack. Even if you are positioned behind it, this attack will hit for massive damage. The second you see the Vanguard fly up, be sure to roll backwards immediately. As long as you can time your dodge for this attack and stay behind it, taking down the Vanguard should be no problem.

Attack From a Distance

If you would rather not put yourself at risk of getting smashed by Vanguard's giant axe, it can also be easily taken down from a distance. When you encounter it in Shrine of Storms, it will be standing in an open field. There will also be Baby Stingrays flying overhead and sniping you. As long as you keep a reasonable distance, attacking the Vanguard will not agro it. For bow or Magic builds, hang back and pelt the Vanguard with attacks until you defeat it. However, watch out for the Magic attacks of the Baby Stingrays above. It may be safer to take them out first.

In order for us to make the best articles possible, share your corrections, opinions, and thoughts about 「How to Beat the Vanguard | Demon's Souls PS5」 with us!