How to Beat the Old Hero | Demon's Souls PS5 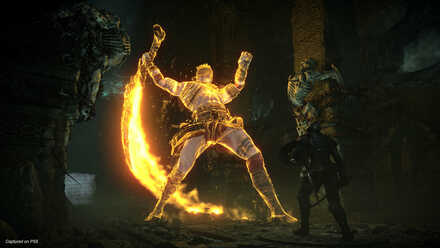 This is a guide on how you can beat the Old Hero boss in the Demon's Souls Remake for the Playstation 5. Read on to learn strategies, drops, and stats about the Old Hero.

Attack Him From Behind

It is recommended to attack the Old Hero from behind. His sword swings will not hit you for as long as you remain behind him. And given his large size, you can easily steer clear of his attacks as well by keeping your position.

Be Careful When You're Distanced From Him

The Old Hero will sometimes step back and distance from the player to make a devastating attack against you. If he does this, avoid his line of sight immediately by rolling.

Run Away When He Raises His Sword

When the Old Hero grips his blade with both hands he will smash it into the ground, damaging anything under it and nearby with the shockwave it disperses. This is a good chance to go get a few hits in as he recovers.

The Old Hero's attack power is extremely high. Also, the range of his attacks is very large and wide, so don't be aggresive with attacking. The safest strategy is to use hit-and-run tactics for this fight.

When Fighting Ranged, Hide at the Altar

The Old Hero will keep on roaming the hallway but he'll never reach the altar where a corpse was laid on. When the Old Hero is far away, you can land a free ranged spell or attack on him.

Post (0 Comments)
Opinions about an article or post go here.
Opinions about an article or post
We at Game8 thank you for your support.
In order for us to make the best articles possible, share your corrections, opinions, and thoughts about "How to Beat the Old Hero" with us!
When reporting a problem, please be as specific as possible in providing details such as what conditions the problem occurred under and what kind of effects it had.