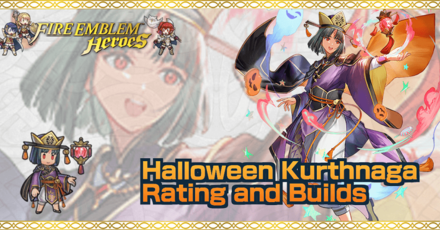 This is a ranking page for the hero Kurthnaga - Autumn Goldoan from the game Fire Emblem Heroes (FEH). Read on to learn the best IVs (Individual Values), best builds (Inherit Skill), weapon refinement, stats at Lv 40, and more for Halloween Kurthnaga. 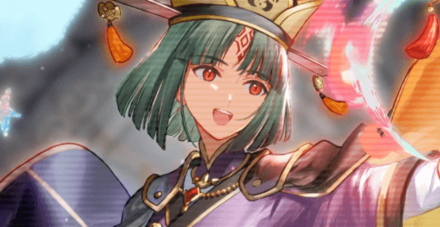 Halloween Kurthnaga's best IVs are +Atk and -Spd. +Atk helps him boost damage output to eliminate his foes on his counterattacks. His Spd is a dump stat and boosting it will not change most of his matchups, thus it is safe to take as a bane.

If you want to build a +10 merged Halloween Kurthnaga, we recommend a +Atk IV. Maximizing his Atk ensures that he kills his foes after one round of combat. His Def and Res are above average as well; they're decent options if you want to focus on tanking specific matchups.

This is a high investment build aimed to use Kurthnaga as a wall. His Lantern Breath+ should be refined with the Res upgrade to boost the damage reduction of Dragon Wall 3. Quick Riposte 3 ensures that Kurthnaga makes a follow-up attack.

Halloween Kurthnaga is a close magic attacker (range = 1). Therefore, when not accounting for the Weapon Triangle, the amount of damage he deals will be equivalent to his Atk minus the foe's Res stat. 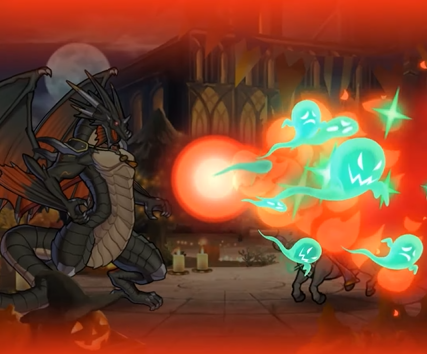 Lantern Breath+ is a strong dragonstone, assuming Halloween Kurthnaga meets the conditions to activate it in combat.

It has multiple effects that rely on his foe either initiating combat or having HP ≥ 75%.

Lantern Breath+ is fully reliant on meeting these conditions in order to function!

Halloween Kurthnaga's defensive stats are all above average, with base 45 HP, 36 Def, and 35 Res. The high HP stat is beneficial to use skills such as Infantry Pulse 3. His Def and Res stats, while not impressive, are still rather high and enough to withstand a couple of attacks.

Halloween Kurthnaga's Spd stat is below average, sitting at base 27. It is not good enough where investment would change matchups.

However, it is decent enough where he will outspeed pure tanks who have opted to dump Spd altogether.

Halloween Kurthnaga also takes 1.5x damage from dragon-effective weapons like Falchion or Naga, and one blow from these types of weapons is sure to take him/her down. Make sure you know what weapons you are up against before hopping too far into the line of battle!

Halloween Kurthnaga as a Source Hero

Halloween Kurthnaga can be used to inherit Lantern Breath+ and Even Pulse Tie 3.

Lantern Breath+ is unique to Halloween Kurthnaga as of October 2021, while Even Pulse Tie 3 is available via Divine Codes.

Unless you really need Even Pulse Tie 3 on another unit, prioritize Lantern Breath+ for Skill Inheritance.

How to Get Halloween Kurthnaga / Illustrations / Voice Actor / Quotes

How to Get Halloween Kurthnaga

Halloween Kurthnaga is a limited time Hero who can be pulled from a Special Heroes Summoning Event. They do not appear in regular summons.

Register as a member and get all the information you want. (It's free!)
Login
Opinions about an article or post go here.
Opinions about an article or post
We at Game8 thank you for your support.
In order for us to make the best articles possible, share your corrections, opinions, and thoughts about "Halloween Kurthnaga Builds and Best IVs" with us!
When reporting a problem, please be as specific as possible in providing details such as what conditions the problem occurred under and what kind of effects it had.