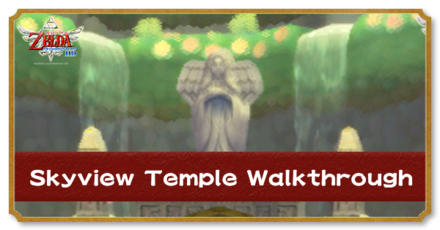 This is a complete guide to Skyview Temple for The Legend of Zelda: Skyward Sword HD for the Nintendo Switch. Read on to learn more about how to progress through the story, where to find treasure chests, Goddess Cubes, Heart Pieces, and other collectibles, as well as how to beat story bosses and more! 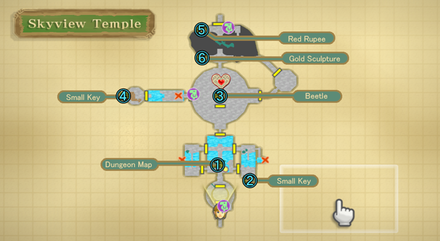 Head down the stairs then activate the Red Crystal 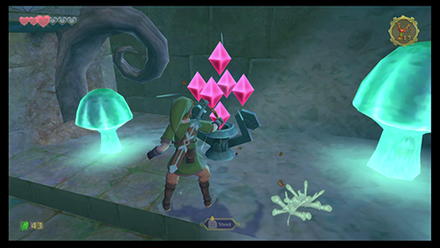 Strike the Red Crystal to open up the gate below. Head through the gate and climb the pedestal.

Rotate your sword quickly to make the eye dizzy 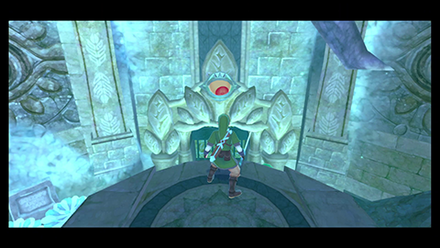 The eye above the gate will affix it's gaze at your sword. Swing the sword around to make the eye dizzy. Once successful, the eye will break and the gate below will open. 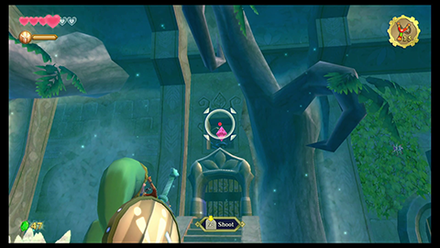 Defeat the Green Bokoblin in this central room. Aim above the gate to your right to hit another Red Crystal with your Slingshot. The gate below will open; go through it. 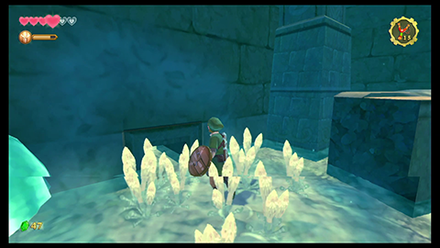 Proceed with caution as you cut down webs and defeat the Walltulas and Skulltulas in the room. On the lower level, look for an alcove you can crawl through on the left wall. On the other side, hit the Red Crystal above the statue.

Return to the central room. Activate the Red Crystal under the door of the west room 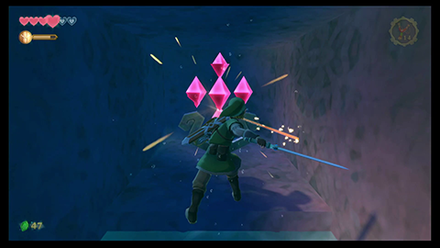 Go back to the central hall and head to the room opposite you. Drop down into the water to discover a passage under the door. Strike the Red Crystal found here to open the western door.

Lower the vines using your Slingshot then swing across 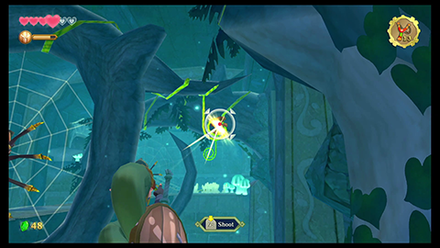 Defeat the Green Bokoblin found here, but ignore the Skulltula for now. Shoot the two vines down on the right side of the room to swing across. Get on the bridge, attack the Skulltula's bellies. Look to your left and shoot the Red Crystal to raise the water level even further.

Don't forget to climb the nearby stairs into the door. Follow the path to find a blue chest with a Dungeon Map inside.

Return to the central room. Climb up to the entrance of the southeast room 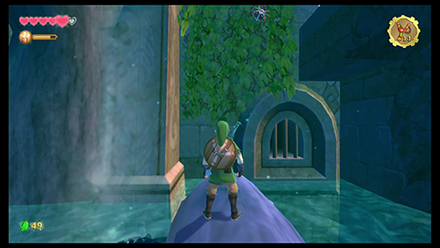 Head back to the central room and jump onto the floating log on the east side of the room. Cross it and climb up the vines on the wall. Follow the path and enter the door.

Unlock the two-eyed Eye Door to get the Small Key

Make both eyes dizzy at the same time 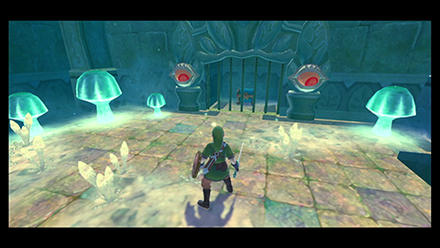 Defeat the Skulltula on this side of the room, then proceed to disable both eyes on the sides of the gate with the chest. Obtain a small key.

Eye Sentry Guide: How to Pass the Temple Eye Door

Shoot the Red Crystal above the building 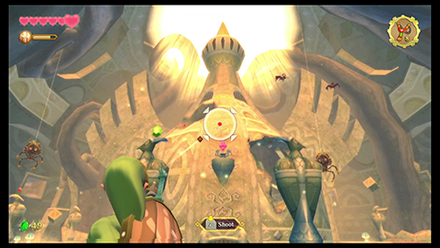 Shoot at the Red Crystal in front of you to open the gate beneath it. Prepare for a miniboss fight then enter the dome.

Defeat the Stalfos inside to get the Beetle 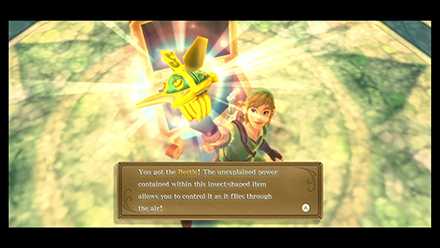 In the dome, you'll have to duel with a Stalfos. He wields two swords so it's best to attack it in the direction where the swords aren't. Alternatively, wait for him to strike before executing a Shield Bash to stun him. Then counterattack with slashes of your own.

After defeating the Stalfos, open the Blue Chest to obtain a Beetle. 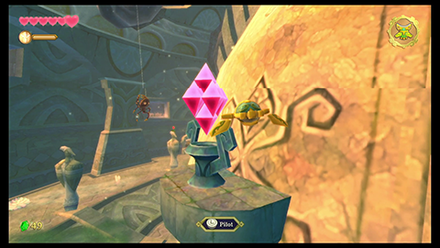 Equip the Beetle and shoot it towards one of the openings in the ceiling. Guide the beetle to hit the Red Crystal outside of the room. This will allow you to exit back into the large chamber. 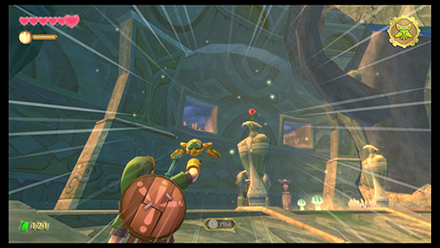 Head towards the west part of the large chamber, near where the bird statue is. Guide the Beetle through the small openings on the wall to open the gate.

Get the Heart Piece in Skyview Temple 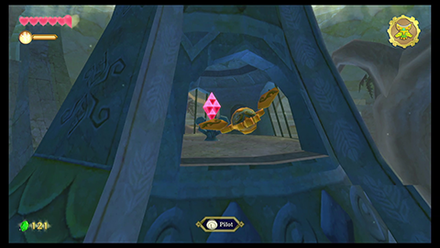 You may also guide the Beetle to the top of the Stalfos' dome where a Red Crystal can be found. Activating this Crystal will give you access to a Piece of Heart behind the dome.

Use the box as a platform 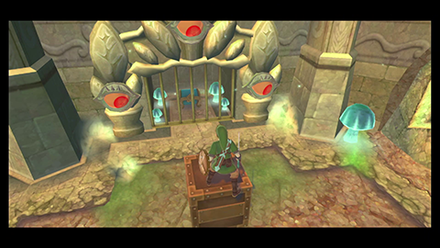 This room has a Skulltula to beat and another eye puzzle. Standing in the center will catch the attention of two of the eyes, but to open the third, you'll need to be higher. Pilot the beetle to the upper part of the room to drop a crate. 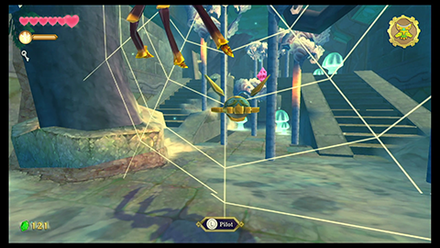 Head back through where you came in, but this time, send a beetle to the opposite direction and past the Skulltula to hit the Red Switch. The water level will rise. Allowing you to swim across to the steps on your left.

Continue along by cutting down the web and defeating the Skulltula. Then proceed up the stairs, cut down the skinny trees, then crawl through the passageway. This should lead you back to the main chamber.

Return to the large chamber. Use the Beetle to defeat the Deku Baba above the tightrope leading to the eastern door 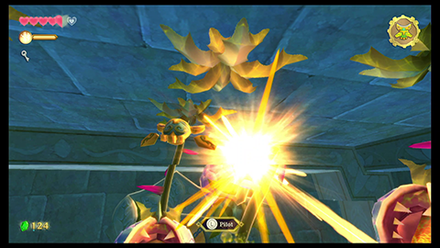 Head to the Eastern room where a locked door can be found beyond a tightrope. The path will be blocked by 5 Deku Babas from the ceiling. Use the Beetle to cut down the stems of these Deku Babas before proceeding.

Use the Small Key to enter the eastern room 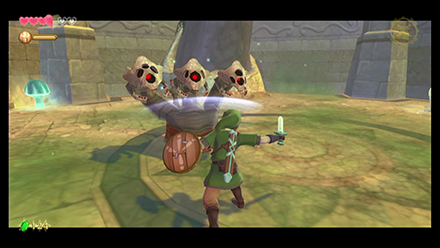 Unlock the door and go through it. Proceed through the hallway cutting down the boards in your way. You'll find yourself in a small room with a Staldra. Defeat it by striking all three heads in one slice. 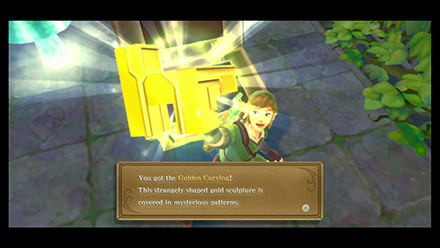 Traverse the branches then swing from one vine to another to get to the corner of the room with the silver chest. Here you'll obtain a Golden Carving which you'll need to open the boss door. 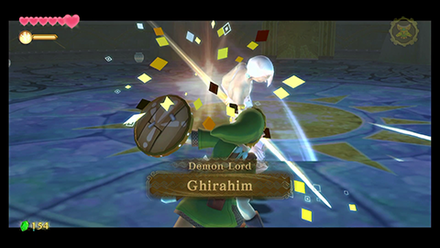 Battle Ghirahim. For his first sequence, he will approach you as if reaching for your sword. Attack in the direction opposite of his hand to avoid getting your sword grabbed. 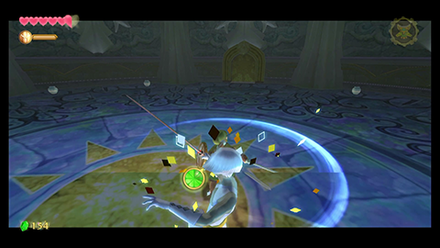 For his next sequence, he will equip himself with a sword. With proper timing, you may shield bash his attack then counterattack. He may also attack you with projectiles which you can reflect with your shield, or by slashing in the same direction as how the projectiles form. Whenever he teleports close to you, we recommend using a spin attack to catch him off guard.

Remember to acquire an Empty Bottle to collect the Sacred Water.

Find a Small Key in a hole on the eastern room 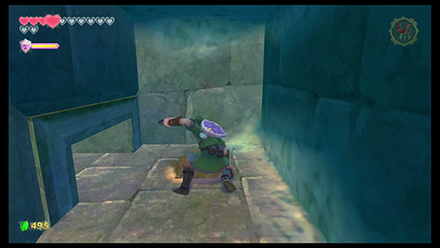 Once in the large room with the bird statue, go to the room on the right. Dive into the water and swim through the small opening and into the next room.

Swim to the surface then climb up the vines on the wall to find the hole with a small key buried in the ground.

Head back to the main room and use the small key to unlock the door. Continue forward to the deepest part of the temple.

Defeat the Archer Bokoblins across the tightrope 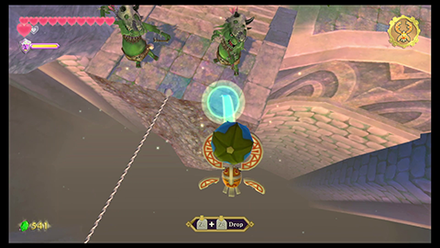 You should find two archer Bokoblins across the tightrope. It would be really difficult to cross with the two of them firing at you. We recommend going back out of sight into the previous room first.

From here, use a beetle to fly in, grab a bomb flower from beneath the branch and dropping it onto the Archers. Now you can safely cross the tightrope.

Defeat the 3 Stalfos in the Boss Room 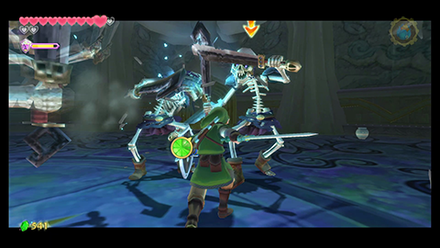 Go through the boss door to find yourself battling 3 Stalfos. They will have the same attack patterns as before, but now there are more of them. Do your best to strike them at an angle where they cannot block your strike.

Alternatively, we recommend using Bombs. When caught in an explosion, their arms will drop leaving them unarmed. During this brief moment, they will be vulnerable to all manners of attacks. 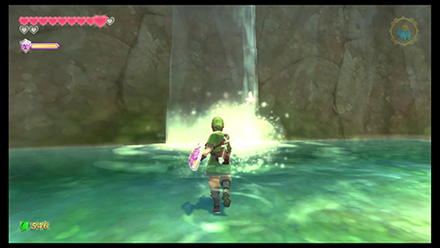 Ghirahim is the boss you will face at the end of Skyview Temple. Use your sword and shield to defeat him in a one on one battle. 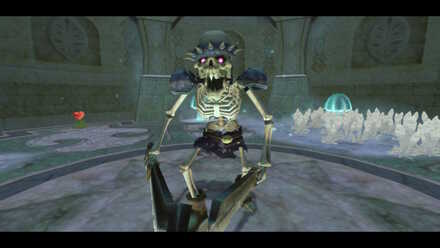 While navigating Skyview Temple, you'll face against a Stalfos miniboss. Defeating it rewards you with the Beetle. 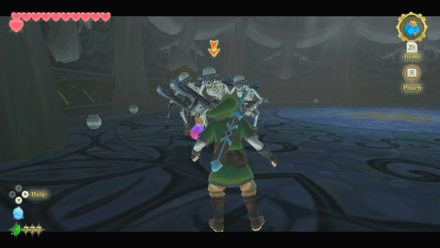 During the quest to obtain the Sacred Water for Faron, you'll face against three Stalfos in the room where you first fought Ghirahim. Defeating them allows you to access Skyview Spring and collect the Sacred Water.

In order for us to make the best articles possible, share your corrections, opinions, and thoughts about 「Skyview Temple Walkthrough: Maps and How to Clear the First Temple | Zelda: Skyward Sword HD (Switch)」 with us!