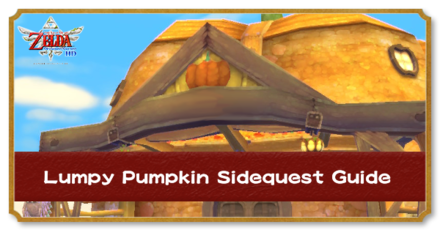 This is a guide to the Side Quest in Lumpy Pumpkin, in The Legend of Zelda: Skyward Sword HD for the Nintendo Switch. Read on to learn how to start the Lumpy Pumpkin Sidequest, deliver pumpkin soup to the Knight Commander, balance the pumpkins, and perform the harp duet at the Lumpy Pumpkin to earn a Piece of Heart!

Break the Chandelier to get a Piece of Heart 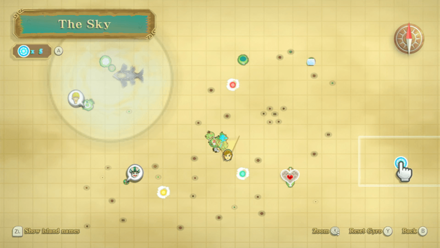 As soon as you gain access to your Loftwing and can travel around freely (after Zelda goes missing), you can fly southwest and head toward the Lumpy Pumpkin at Pumpkin Landing.
Skyloft Walkthrough

Roll at the railing to get the Piece of Heart 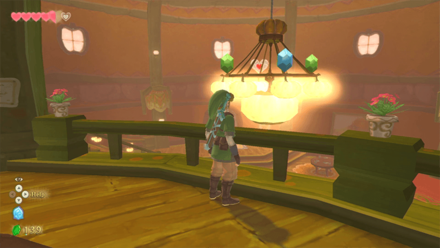 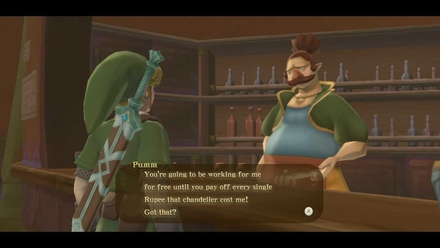 At this point, talking to an angry Pumm on the ground floor of the Lumpy Pumpkin after you've smashed the chandelier will trigger the side quest. He will ask you to do some tasks to help compensate for his broken chandelier. 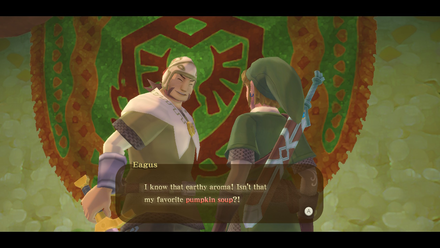 Your first task is to Deliver Pumpkin Soup to the Knight Commander. First, you must already have an empty bottle. One can be obtained for free by speaking with the Luv, the poitions dealer at the bazaar.

How to Get All Empty Bottles 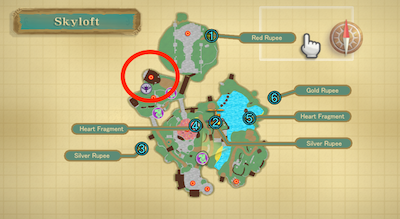 Empty bottle in hand, speak with Pumm to recieve the Hot Pumpkin Soup. Take the bottle of soup to Eagus at the Sparring Hall at Skyloft, which is located just Northwest of the Knight's Academy (where you obtained the Practice Sword). You must arrive within five minutes and deliver the soup, or it will go cold and you will have to restart.
Pumpkin Soup Delivery Quest

Job 2: Carry a Stack of Pumpkins to Storage 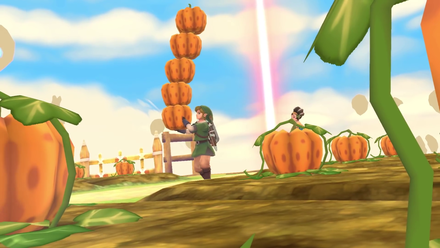 Don't drop any of the Pumpkins

For your second task, you need to carry a stack of pumpkins on the Pumpkin Landing's storage area without dropping any of them. This task can only be started after completing the Earth Temple.

The key to not dropping any pumpkins is to move forward towards your left, then take a step to the right so the pumpkins all start to shift right. Once they do, continue forward and left until you get to the storage room.

Job 3: Perform In Front of an Audience

Use the Goddess's Harp to Perform

For the third and final task, you need to perform in front of an audience using your Goddess's Harp at the Lumpy Pumpkin at night. This can be done after completing the Mining Facility and receiving the Goddess's Harp.

You need strum your harp in time with the audience's movements to succeed. 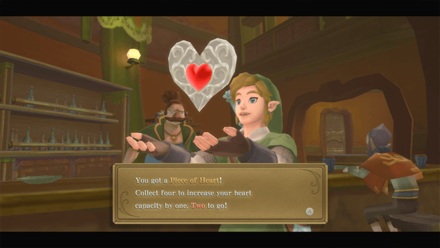 In addition to the Piece of Heart obtained from the Chandelier at the start of the quest, completing all of Pumm's jobs will net you another Piece of Heart.

Register as a member and get all the information you want. (It's free!)
Login
Opinions about an article or post go here.
Opinions about an article or post
We at Game8 thank you for your support.
In order for us to make the best articles possible, share your corrections, opinions, and thoughts about "Lumpy Pumpkin Sidequest Guide" with us!
When reporting a problem, please be as specific as possible in providing details such as what conditions the problem occurred under and what kind of effects it had.