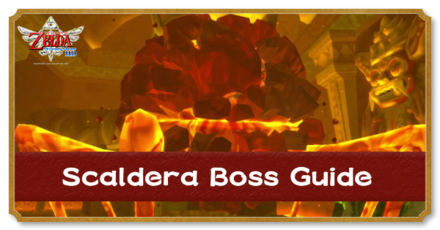 This is a guide for Scaldera, the boss at Earth Temple
in The Legend of Zelda: Skyward Sword HD for the Nintendo Switch. Read on to learn strategies for how to beat Scaldera, see Scaldera's moves, and learn rewards for beating them!

Hit with a Bomb

To damage Scaldera, first hit him with a bomb to push him down the slope. Either a bomb or a bomb flower is effective.

Not Effective While Burning

You can hit Scaldera with a bomb but it has no effect if his body is burning. Over time, it will return back to its normal state. Wait for it while climbing up the slope. If all goes well, Scaldera will be able to step on the bomb flowers as soon as the burning is gone.

When you hit Scaldera with a bomb, he rolls down the slope, falls, then inhales to do a fireball attack. While he is sucking in air, toss a bomb at his mouth.

When Scaldera inhales the bomb, it will explode in his mouth, exposing his weak point which is his eyes. He will take lots of damage when you slash at his eyes.

Scaldera goes up the slope

For attacks that go uphill, deal with it by going up the hill as well. You can stop the attack by hitting Scaldera with a bomb, but it is not recommended.

The same effect can be achieved when Scaldera steps on the bomb flower, so go up the slope and guide him to the Bomb Flowers.

Leave some distance and avoid the Fireball

After sucking in air, Scaldera spits out a fireball that moves through three positions: the left, right, and middle of the passage. You can avoid it by moving left and right, but if you go to the middle of the slope you will not have time to avoid the next fireball, so avoid it left and right while retreating. (You can replenish your bombs and hearts by going on both ends of the slope)

However, this attack can be stopped by throwing a bomb while he is inhaling, so try to stop the attack as much as possible.

Go through the path

As you damage Scaldera, he will stretch his legs and climb the hill. In addition, the path uphill/downhill will be safe to move as he goes up.

Evacuate to the opposite end

It is an attack where Scaldera goes uphill and will roll down towards your position, so if you are at the right end, move to the left, and if you are in the middle, go to either side.

Register as a member and get all the information you want. (It's free!)
Login
Opinions about an article or post go here.
Opinions about an article or post
We at Game8 thank you for your support.
In order for us to make the best articles possible, share your corrections, opinions, and thoughts about "Scaldera Boss Guide: How to Beat Scaldera" with us!
When reporting a problem, please be as specific as possible in providing details such as what conditions the problem occurred under and what kind of effects it had.