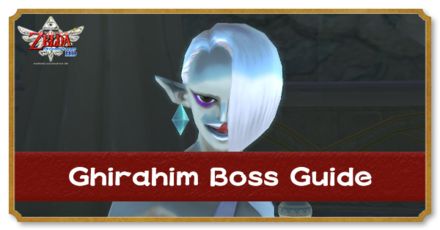 This is a guide for Ghirahim, the boss at Skyview Temple, Fire Sanctuary, Sealed Grounds
in The Legend of Zelda: Skyward Sword HD for the Nintendo Switch. Read on to learn strategies for how to beat Ghirahim, see Ghirahim's moves, and learn rewards for beating them!

How to Beat Ghirahim (First Boss)

Attack Ghirahim at the direction opposite his hand

Ghirahim copies the same direction you're swinging your sword at so if you hit him, your attack will be blocked (like swinging from right to left while pointing to the right).

Slash Ghirahim at the opposite direction his hand is facing. Diagonal slashes and vertical slashes from left to right are more likely to succeed.

Hit Ghirahim When He Teleports

As you damage Girahim, he will take your sword from your hands, change his plan of attack, and teleport behind you. After Ghirahim teleports, he is a little stationary so this is the perfect chance to attack.

Shake the controller to break free.

If you try to hit Ghirahim at the direction where he is guarding himself, he will block you. If you do not resist while he is blocking you, he will steal your sword. Shake your joycon or R Stick to break free. 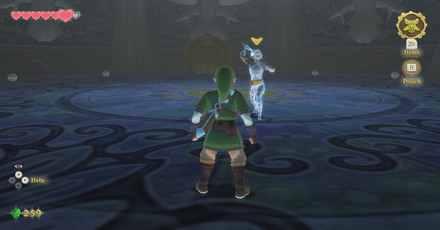 If you do not resist, Ghirahim will steal your sword. After stealing your sword, Girahim will try to throw the sword straight at you, so move left and right to avoid it.

Slash at the right time or move left and right

As you damage Girahim, he will try to take your sword and change the way he fights. When he throws daggers, the daggers are lined up in a straight line and fly all at once, so move left or right to avoid them.

You can also push the daggers back by using shield bash.

Repel with a shield or Block at the right time

Hold a shield or slash at the right time to deal with the rush of attacks after the pattern changes. At this time, please note that if you cut in the wrong direction, you will be attacked.

Immediately hit Ghirahim after blocking his dash attack. You have a small window of time to do this so make sure to hit him with all you've got!

Ghirahim teleports whenever there is some distance between you and him. If he doesn't have a sword on hand yet, he won't attack you so this is a perfect chance to deal some damage to him. Immediately turn around to face Ghirahim.

How to Defeat Ghirahim (Second Battle)

Attack Ghirahim at the direction opposite his hand

Ghirahim (Second Battle), like the first time, moves in the same direction where you are pointing your sword, and if you slash from there, the attack will be quickly blocked (right → left while facing right). With the sword pointing to the left, slash from left to right.

If you try to hit Ghirahim while his daggers are there, the daggers will prevent the attack. It is better to attack the dagger and let it drop. Every time you hit him, he will summon the daggers again.

As you damage Ghirahim, he will take your sword and change the way he fights, just like the first time. There are various chances of attacking in this state, but it is recommended to use your Jump Attack.

Jump Attack is an attack where you shout and jump to hit the enemy, which can be easily avoided by one step.

There is a chance to deal damage using other techniques, but it may be difficult to know what is best between the other options, so we recommend doing a jump slash in the second half.

Shake the Joy-Con to break free

As with the first time, Ghirahim will steal the sword from you if you slash by following the direction you are holding it. Shake the joy-con to break free.

Attack once you get your sword back

After retrieving your sword from Ghirahim, if you do not resist, you will be hit by floating daggers around you. Deal with the daggers immediately once you retrieve your sword.

Flying dagger is a technique where Ghirahim throws one of the daggers floating around him. This attack is quick and difficult to avoid, so use your shield in advance. If you strike him when he still has his dagger, he will knock away your sword. Keep your shield up until Ghirahim attacks with his dagger. Once he does, you'll have the chance to counterattack. 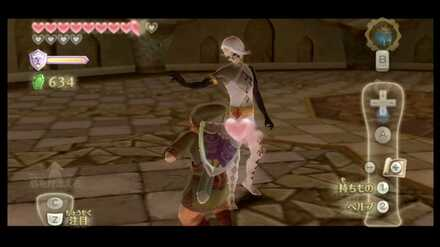 Slap is a technique used by Ghirahim when you and your sword are close to him. It's an attack that you don't see often, but move away by stepping back if it is used.

Slash at the right time or repel it with a shield

As you damage Ghirahim, he will throw daggers at you in a straight line, same as your first encounter with him. The solution is the same as the first and will not damage your shield, so make sure to keep your shield up.

Some daggers are fired around the link. There are two patterns of this attack. 1st pattern: Daggers will surround you all over. This can not be blocked with a shield. Use a spin attack to counter this attack.

Ghirahim will slash at you with his sword. You can either backstep to avoid or counter him with your sword to deal some damage.

Ghirahim will counterattack you if you use Shield Bash on when he uses the attack Cut Off. Backstep to avoid his counterattack.

Move away once Ghirahim jumps

Ghirahim jump slashes by jumping, warping, and then attacking your head. This attack is unavoidable by normal means, but you disrupt this by moving away. After avoiding it, the suki is big, so let's hit the attack.

How to Defeat Ghirahim (Final Battle)

Wait for Ghirahim to approach you

Your 3rd battle with Ghirahim will begin on an aerial stage. You need to push Ghirahim off of the stage to defeat him. If you attack Ghirahim, he will move backwards little by little but this method will take time.

When Ghirahim's hands glow, push him

After cornering Ghirahim to the end of the stage, keep hitting him. When his hands starts glowing, this means he is near the edge and almost off the stage. Keep attacking him until he stumbles and falls off.

After pushing Ghirahim off of the stage, stab him as instructed on the screen. Repeat these steps three times to move on to the next stage of the battle.

How to Do a Fatal Blow

Knock the Sword Beam back

If you stab Girahim three times, you will move to the second stage of the fight. During this, you will deal damage on Ghirahim when you thrust your sword towards his chest. There is also another way to damage Ghirahim and thats by hitting the the sword beam thrown at you . The sword beam can be knocked back by swinging the sword in the same direction as Ghirahim's sword.

(3rd stage) Guard against his attack

Hit back or use Shield Bash

As you attack Ghirahim's chest, he will take out a greatsword and move to the third stage. At this stage, whenever you attack him, he will block it with his greatsword. Keep attacking him until you see his blade beginning to break.

You can also use Shield Bash to guard yourself and deal some damage.

Be careful when Ghirahim changes his stance

You can destroy Ghirahim's greatsword by continuing to attack him. Eventually, Ghirahim will change the direction of his stance while guarding, so be careful since you will get hit by his counter-attack and his sword will be repaired.

Once you destroy Ghirahim's greatsword, you have an opening to hit him as many times as you like.

The punch attack is used in the first stage. The short range of this attack makes it easy to avoid with a single backstep.

Roundhouse kick is an attack that is used after inflicting damage once. This attack needs a bit more time to charge than a punch attack. As with punch attacks, you can easily avoid it by backstepping, but do not hit it or else you will be thrown backwards. 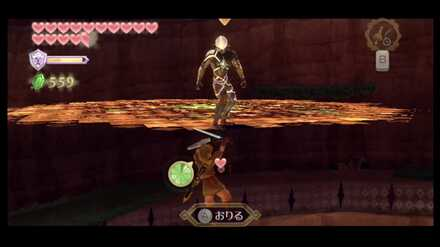 Get away from the edge of the stage

The cliff drop attack is an attack used when the link is grasping at the edge of the stage. If you are attacked, you will not be able to deal with it, so hurry up the cliff before it is launched.

In the second stage of your fight with Ghirahim, he takes out his sword and slashes it when youre within his range. Both vertical and horizontal slashes can be avoided by backstepping.

You can damage him by using shield bash and immediately stabbing him.

Avoid it by backstepping twice

Ghirahim thrusts his sword attack two times at close range. It is best to avoid this attack by backstepping or using a shield.

Swing your sword in the same direction

You can time your attacks and movement visibly and audibly by counter-attacking Ghirahim and by listening to Ghirahim's shout. 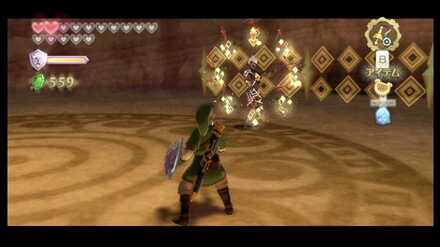 When you are out of Ghirahim's reach, he will summon daggers to throw at you one by one. This attack can be easily prevented be blocked by using shield.

During the third stage of your battle with Ghirahim, he will only attack with a greatsword. You can easily avoid it by backstepping.

In order for us to make the best articles possible, share your corrections, opinions, and thoughts about 「Ghirahim Boss Guide: How to Beat Demon Lord Ghirahim | Zelda: Skyward Sword HD (Switch)」 with us!