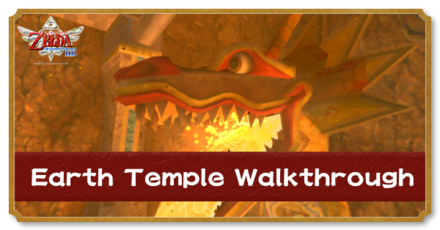 This is a complete guide to Earth Temple for The Legend of Zelda: Skyward Sword HD for the Nintendo Switch. Read on to learn more about how to progress through the story, where to find treasure chests, Goddess Cubes, Heart Pieces, and other collectibles, and more! 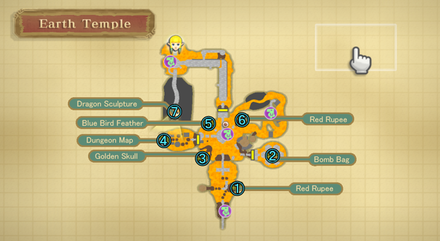 No Pieces of Heart

Cut the three ropes to lower the bridge

Use the Beetle to cut the third rope 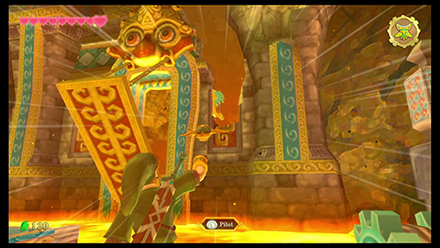 Two of the ropes will be on either side of the bridge. Cut them down with your sword. The third one will be across the lava which you can reach with your Beetle.

Trigger the bomb flowers on the Dragon Head 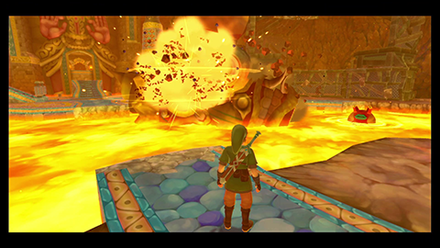 In the large lava pool, a Dragon Head Statue should be floating nearby. Trigger the bomb flowers on it to detonate the structure. An eye ball will be left behind which you can ride across the lava.

Ride the Stone Eye across the lava to the east room. Clear the rubble blocking the door using the nearby Bomb Flowers 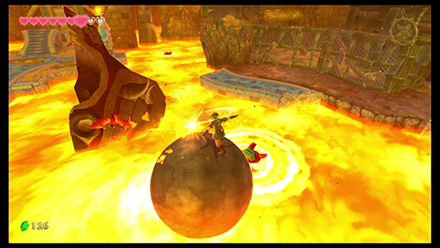 In the southeast part of the room, you'll find a troubled Mogma. He asks you to retrieve his Bomb Bag from the next room. Use the nearby Bomb Flowers to clear the path.

Defeat the 2 Lizalfos to obtain the Bomb Bag 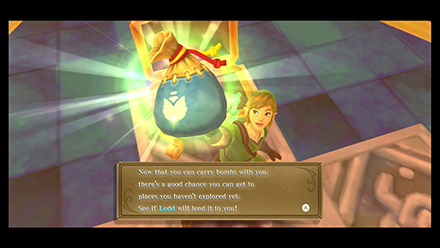 Lizalfos can be tricky to battle, even by facing them one at a time, so battling two can be even more difficult. We recommend taking down one Lizalfo at a time.

Clear the path to the west room 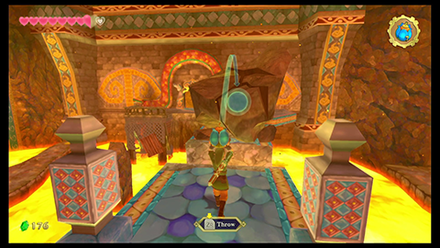 Now equipped with the bomb bag, you should be able to clear the path to the west room. Throw bombs at the rocks to get them out of the way. 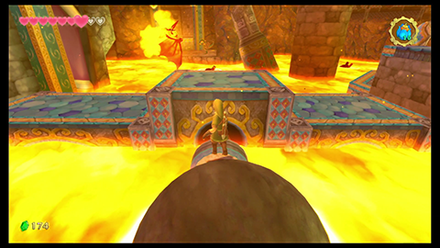 Ride the ball across the lava over to the northeast side of the room. Toss bombs at the crack in the wall to go through 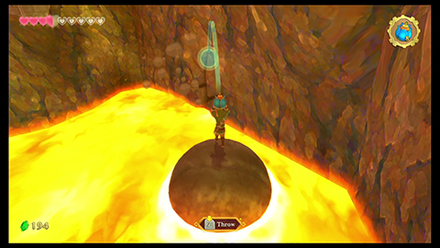 Head back to the central platform and use the stone sphere to navigate to the east side of the room. There will be a Magma Spume here you can roll over. After which, look for a crack in the wall which you can detonate with bombs from your bomb bag.

With the path clear, use your stone sphere to continue forward, being careful of the lava fountains to your right. Keep moving forward till just before the platform with the Bokoblin.

Just in front of the second lava fountain should be another crack in the wall that you can bomb open. Be ready to defeat some Fire Keese as soon as the wall breaks open.

Use the Beetle to cut the rope in front, and at the back of the gate 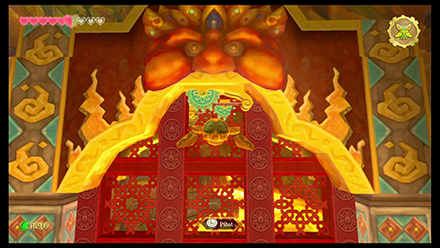 Navigate forward on the stone sphere until you reach a red gate. There is a rope you can cut with your beetle which will raise the gate a bit

Guide another Beetle through the entryway on the left to cut the other side of the rope. This should fully raise the gate allowing you to go through.

Ride the ball across the lava and back into the main room. Push the button on the east side of the bridge 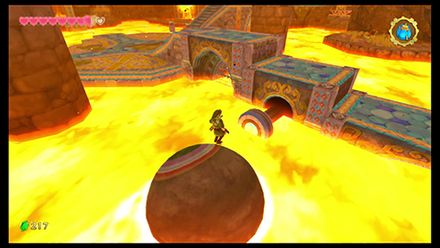 Hop on the stone sphere again and use it to push against the button here to raise the platforms more. You may now hop down to the central platform before making your way up the platforms you raised then enter the Northern door.

Dash up the ramp avoiding the rocks. 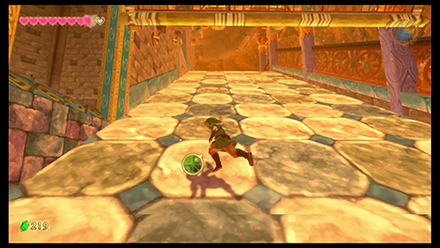 In the next room, head forward and run up the ramp. Be quick to avoid the stones that will roll down. Hug the left wall so that you can have time to restore your stamina.

Crawl through the hole at the foot of the second ramp 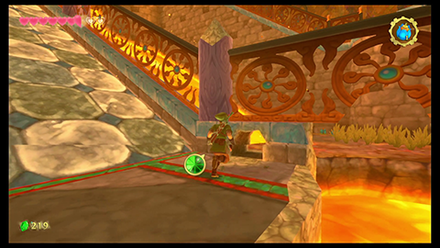 At the base of the second ramp should be an opening you can crawl through on your right. Go through it.

Dig the rightmost hole to unearth an updraft. Go up the steps and follow the path. 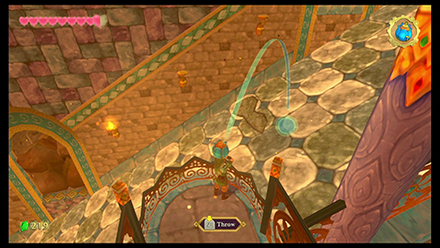 From here you should toss a bomb across the ramp to clear the rocks. This will allow you to have a spot to restore your stamina.

Head back to the base of the second ramp and you should now be able to run up it, taking a rest at the spot you cleared.

Get the Dragon Sculpture from the Silver Chest at the top of the winding path. Run back down escaping the rolling boulder behind you 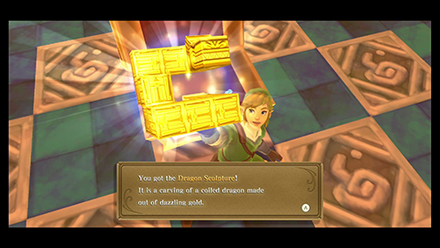 Head up the path on your left. At the top will be a Silver Chest with the Dragon Sculpture. This will be used to unlock the door to the boss.

As you head back to the direction of the door, be ready to dash straight down. A boulder will roll down after you and you'll have to outrun it. After successfully doing so, it will clear the path to the door to the boss. 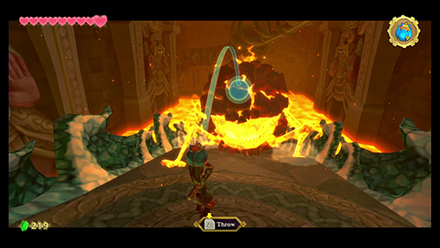 For his first attack sequence he will slowly climb up the ramp towards you. Back away slowly keeping your focus on him, then throw a Bomb Flower at him when his flames dissipate. This will knock him down to the bottom of the ramp. 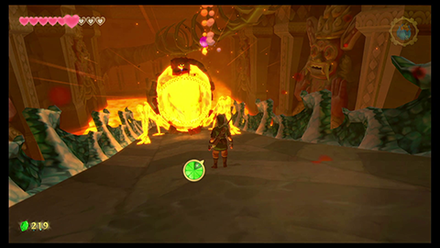 From the bottom of the ramp, he will first inhale before trying to shoot fireballs at you from a distance. Strafe side to side to keep your focus on Scaldera. Toss a bomb into his mouth as he is inhaling.

Attack his weakness with your sword 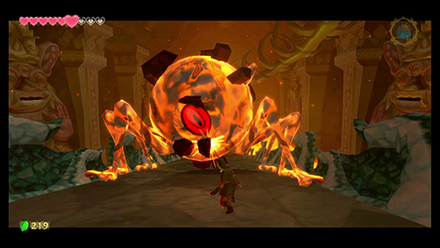 With each successful bomb thrown in his mouth, more and more of his hard outer shell will be removed. While he is recovering, take this opportunity to strike his eye in the revealed sections of his body.

Avoid getting rolled on 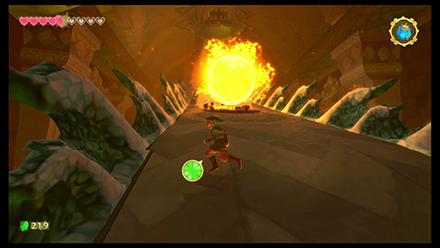 When all of his armor is removed he will now stretch his legs and run past you before dropping down to roll on you. Stick to the sides to avoid getting rolled over.

As he reaches the bottom of the ramp, he will once again inhale before shooting fireballs at you. Take this chance to disable him further by throwing a bomb as he inhales, followed by a flurry of slashes at his exposed eye. Keep doing this and soon enough you will slay Scaldera.

Continue to the Lanayru Mine Walkthrough

Scaldera is the boss you will face at the end of the Earth Temple. Use your newly acquired bombs to take him out!

You'll face two Lizalfos as the miniboss of the Earth Temple. Defeating them rewards you with the Bomb Bag.

Register as a member and get all the information you want. (It's free!)
Login
Opinions about an article or post go here.
Opinions about an article or post
We at Game8 thank you for your support.
In order for us to make the best articles possible, share your corrections, opinions, and thoughts about "Earth Temple Walkthrough: All Maps, Treasure Chests, and Heart Pieces" with us!
When reporting a problem, please be as specific as possible in providing details such as what conditions the problem occurred under and what kind of effects it had.