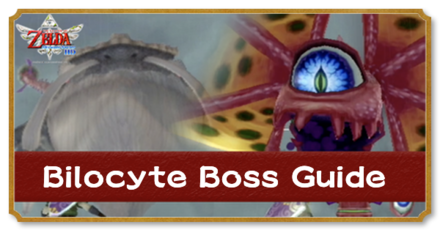 This is a guide for Bilocyte, the boss at Thunderhead
in The Legend of Zelda: Skyward Sword HD for the Nintendo Switch. Read on to learn strategies for how to beat Bilocyte, see Bilocyte's moves, and learn rewards for beating them!

Attack the eyeballs on Levias' body

In order to help Levias, first attack with a Spiral Charge towards the eyeballs on the tentacles that grow from Levias. As Levias keeps moving, the distance can only be reduced bit by bit, so you need to be quite close when attacking.

If you destroy all the tentacles, the parasite's body Bilocyte will appear on Levias' head. You can't attack this while riding the Loftwing, so land on Levias' head. Levias is still moving at this time, so fly as low as possible and dive.

Strike the projectile, hit the left and right fins

Destroying the left and right fins will leave Bilocyte vulnerable to attacks. You can deal damage when you hit his eye during this vulnerable state.

Another way of hitting his eye is by using your Bow or by using Skyward Strike.

Levias does not attack, but if you hit his body, you will get damaged. Keep in mind that the tail part is big and moves around, so stay away from it.

Hold your shield and flip it back with a sword

Bilocyte makes an attack that spits projectiles at you. You can attack and defend at the same time by striking it back to Bilocyte with a sword. If you are not confident, hold the shield as it will provide insurance if you make a mistake in the timing.

Register as a member and get all the information you want. (It's free!)
Login
Opinions about an article or post go here.
Opinions about an article or post
We at Game8 thank you for your support.
In order for us to make the best articles possible, share your corrections, opinions, and thoughts about "Bilocyte Boss Guide: How to Beat Bilocyte" with us!
When reporting a problem, please be as specific as possible in providing details such as what conditions the problem occurred under and what kind of effects it had.