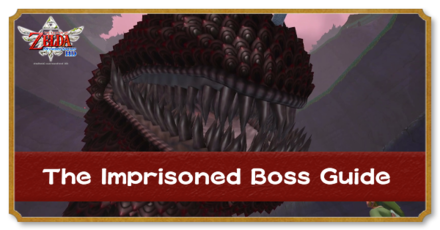 This is a guide for The Imprisoned, the boss at Sealed Grounds
in The Legend of Zelda: Skyward Sword HD for the Nintendo Switch. Read on to learn strategies for how to beat The Imprisoned, see The Imprisoned's moves, and learn rewards for beating them!

How to Beat The Imprisoned

To defeat The Imprisoned, you must first crush all his toes to knock him down. There are 4 toes, 3 in the front and 1 in the back. Use basic attacks and a Spin Attack on his toes.

If you crush all his toes, he will get knocked down and you will be able to attack the stone pillars on his head. You can drive the stone pillar inside his head by doing an upwards motion using your sword to damage him. 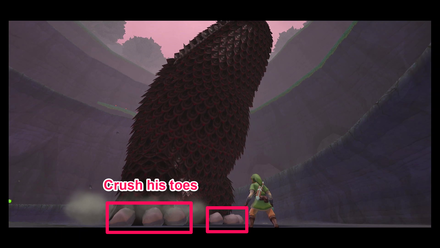 Hit his foot when it touches the ground

The Imprisoned doesn't attack you directly, he just stomps around to damage you. You should aim and prepare to attack once one of his the feet that touches the ground. Using a Spin Attack is recommended so you can hit multiple toes at the same time.

Use the geysers to avoid his attack

Instead of attacking his foot, you can simply use the geysers to avoid his attacks. Find a spot on the upper ledges where you can land directly on his head and drive the stone pillar downwards.

After driving the stone pillar upwards, the Imprisoned will go around the area, while being invincible for a few moments. You will notice holes on the ground, use this to retreat and to go to the upper part of the pit via the geysers.

How to Defeat The Imprisoned (Round 2)

Same procedure as Round 1 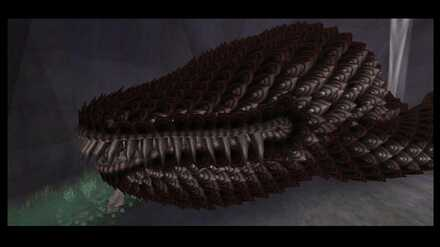 The technique to defeat The Imprisonded (Round 2) is the same as the first time, crush all his toes to knock him down → drive a stone pillar. You can also use the method of driving a stone pillar directly on your head without bringing it down.

Once he is knocked down, go to his head

The arm is long and blocks the way to the head when The Imprisoned is knocked down. Go down the ledge and use the updraft to reach the head faster.

Get help from Groose

In your second visit to Sealed Grounds, Groose will support you with a machine. By aiming and hitting the bomb, you can use this to your advantage to stop The Imprisoned's attacks.

The Imprisoned's Attack Patterns (Round 2)

Since the attack of The Imprisoned is the same as the first visit, it is okay to deal with it the same way you did during your first battle. In the second visit, you can attack The Imprisoned's toes with bombs and a bow from a safe distance. This works especially well if you're not good at attacking his toes directly.

The Imprisoned does crawling attack after you hit the pillar on his head twice. You can avoid it as you did when you first encountered him, but you can stop the attack by asking help from Groose.

How to Defeat The Imprisoned (Round 3)

Drive the pillar into his head

On your third visit to defeat The Imprisoned, first crush all his toes, then take down and hit the stone pillar. Walking is faster compared to the first and second times you encounter him, but you can also use Groose's machine from the beginning.

He will start to fly, so use Groose's machine to hit him

If you take him down and drive the stone pillar into his head, he will fly and try to go directly to the temple. Use Groose's machine to hit him and prevent him from going to the temple.

Near the end, use the machine to shoot yourself directly near the pillar

Get Groose's help and shoot yourself directly to the stone pillar on The Imprisoned's head when he gets dangerously close to the temple.

The Imprisoned's Attack Patterns (Round 3)

Have Groose stop The Imprisoned

During Round 3 on your battle with The Imprisoned, he walks fast. It is difficult to attack him with a sword while avoiding his attacks. You can use Groose's machine from the beginning to deal with him without having to deal with him. 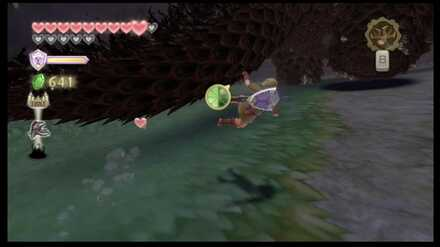 Stay away until he stops moving

The Imprisoned has a tail that can cause damage while he is walking. You do not have to approach him since you can use Groose's machine to avoid getting hit.

Post (0 Comments)
Opinions about an article or post go here.
Opinions about an article or post
We at Game8 thank you for your support.
In order for us to make the best articles possible, share your corrections, opinions, and thoughts about "The Imprisoned Boss Guide: How to Beat The Imprisoned" with us!
When reporting a problem, please be as specific as possible in providing details such as what conditions the problem occurred under and what kind of effects it had.