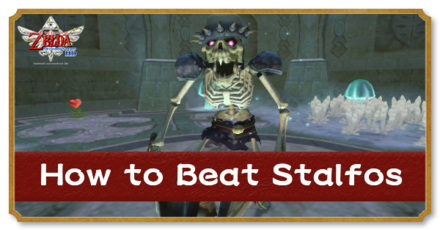 This guide will show you how to beat Stalfos, an enemy in the Legend of Zelda: Skyward Sword HD for the Nintendo Switch. Read on to learn where to find Stalfos, drops for beating it, as well as strategy for beating it.

Stalfos are duel wielding, skeleton knights that can be found in dungeons. Despite their intimidating appearance, they fight very defensively.

There are any approaches to take when fighting Stalfos. Find which style suits you best.

Using their two swords, Stalfos will defend against multiple slash options at once. Players need to do a slash attacks where the Stalfos' defense is open. After a few body shots the Stalfos should go down.

If you are patient, you can wait for the Stalfos to attack you first. With the right timing players can Shield Bash the incoming attack and stun the Stalfos. While stunned, players can get some uninterrupted damage done. The timing of the Shield Bash is tough to get as you need to input it later than you might think.

When hit by the shock-wave of a bomb, the Stalfos will lose both of its arms making it defenseless. This gives players an easy opening to slay the Stalfos.

If your attack is blocked multiple times in a row, the Stalfos will unleash a powerful counter attack so attack carefully.

Register as a member and get all the information you want. (It's free!)
Login
Opinions about an article or post go here.
Opinions about an article or post
We at Game8 thank you for your support.
In order for us to make the best articles possible, share your corrections, opinions, and thoughts about "Stalfos Enemy Guide: How to Beat Stalfos" with us!
When reporting a problem, please be as specific as possible in providing details such as what conditions the problem occurred under and what kind of effects it had.