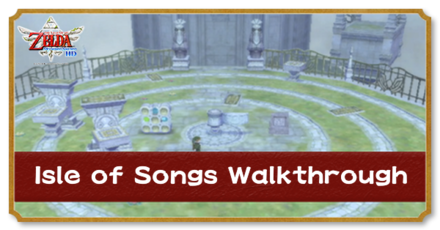 This is a complete guide to Thunderhead (Isle of Songs) for The Legend of Zelda: Skyward Sword HD for the Nintendo Switch. Read on to learn more about how to progress through the story, where to find treasure chests, Goddess Cubes, Heart Pieces, and other collectibles, as well as how to beat story bosses and more! 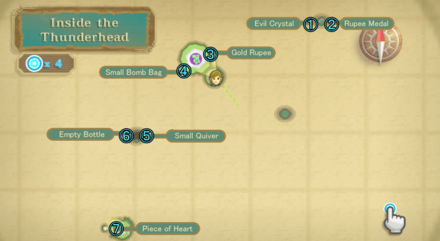 Following the light beam, descend onto the island just before where the stone tower is. 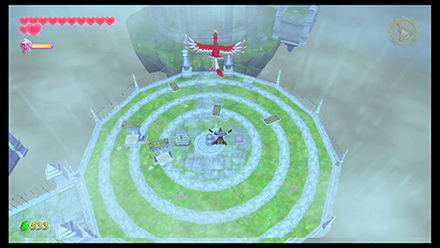 As you fly into the Thunderhead, you'll reach a stormy area of the sky. Continue following the beam of light forward, then land on the platform just before the tower it's shining on. Fi should notify you that you have arrived at the Isle of Songs.

Align the stone platforms to form a bridge between the island and the stone tower. 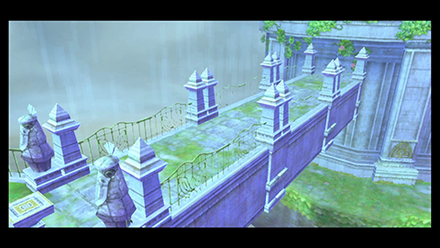 You'll have to align the platforms by rotating the piece at the middle of the island. You'll also have three crystals on the left which will help you align the platforms. To solve this puzzle, start by striking the crystal on the right side.

Grab hold of the centerpiece and push it clockwise 6 times. Then strike the crystal on the top side.

Grab hold of the centerpiece and push it clockwise 9 times. Then once again strike the crystal on the right side.

Push the centerpiece clockwise once and the path to the tower should be complete. Cross the bridge and crawl through the entryway to find yourself in the Isle of Songs.

You'll encounter Bilocyte after visiting the Thunderhead with the special pumpkin soup. You need to make use of the Spiral Charge attack to knock out the four eyes on Levias and battle the parasite on the whale to defeat this boss.

Register as a member and get all the information you want. (It's free!)
Login
Opinions about an article or post go here.
Opinions about an article or post
We at Game8 thank you for your support.
In order for us to make the best articles possible, share your corrections, opinions, and thoughts about "Thunderhead (Isle of Songs) Walkthrough: All Maps, Treasure Chests, and Heart Piece Locations" with us!
When reporting a problem, please be as specific as possible in providing details such as what conditions the problem occurred under and what kind of effects it had.