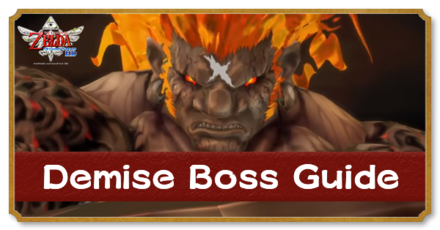 This is a guide for Demise, the final boss in The Legend of Zelda: Skyward Sword HD for the Nintendo Switch. Read on to learn strategies for how to beat Demise, see Demise's moves, and learn rewards for beating them!

How to Beat Demise (Final Boss)

Demise will hold his sword in a defensive position, and any attack you throw at him will be blocked. However, after he attacks you, you'll have a small window of time to fight back. Make sure you are holding your shield and use Shield Bash when he attacks first, and quickly fight back to inflict damage.

When you try to use attack Demise as he’s taking damage, he may block your attack and then counter it with another attack. This counter attack can also be blocked by using Shield attack.

Pattern on how to defeat Demise

Aim when his guard is down

Demise will guard against your attacks, but you can damage him by changing the direction of your attack. If you deal a lot of damage in a short time, Demise will be brought down. The list above is to help you quickly progress through the first stage without letting the final boss act at all.

Raise your sword to summon lightning

If you damage Demise, the weather will change and you will moved to the second stage. At this stage, you can still let the enemy attack first and deal damage, but there's an easier way. You need to raise your sword to summon lightning.

Be careful because if Demise attacks first, he will use Rush attack or Lightning strike.

Slash the air to throw the lightning at Demise

When you summon lightning, swing your sword quickly to throw a Lightning strike attack. When you hit the end, you go down and you have a chance to attack.

Hit Demise when he is knocked down

Whenever Demise is down, he is vulnerable. This is the best time to deal some damage to him. However, you will always fail when you try to hit him the first time he gets knocked down. The second and other consecutive times that you do, you will succeed in dealing damage.

During the first stage and second stage, all of your attacks will be blocked by the final boss. To get a chance to deal damage, equip your shield and let him attack first. Immediately after blocking his attack, hit him with your sword.

If you continue to attack Demise when he isn't knocked down, he will block it and follow it up with a counter-attack (this does not happen all the time). When he attacks you, he will hit you with 2 consecutive swings.

Punch attack is a technique where Demise moves forward then punches you after a momentary pause. The attack is so fast that it's quite difficult to deal with when you encounter it. This is why it is important to hold your shield in advance for safety in case you can't dodge it.

Swing up → Swing down is an attack where Demise swings the sword up and down from a pointing stance, hitting you two times. This attack is quick and difficult to defend with a shield, but most of the time it has a short range and cant reach your shield. If using the shield fails, the second shot will cause damage, so avoid it by backstepping.

You can counter this attack by using shield bash then counter him afterwards by slashing him while he is down.

Rush slash is an attack used by Demise whenever you try to summon lightning during the second stage. After Demise bends down a little, he will rush to where you are and slash you, so be prepared to use Shield Bash whenever you see Demise bending down.

Avoid by stepping to the side

Thunder strike is an attack used by Demise whenever his sword is covered in lightning. He will use it whenever you are out of his reach, but whenever you try to summon lightning, the chances of Demise using this move will increase further. It's a simple projectile, but you can't use your shield against it, so avoid it by stepping sideways.

You can also hit his lightning strike to offset it, but it is very difficult to do.

Use the Bug Net

You can use the Bug Net to counterattack Demise's thunder strike. Successfully deflecting the attack stuns him temporarily, making him open to attacks.

How to Get the Bug Net

Register as a member and get all the information you want. (It's free!)
Login
Opinions about an article or post go here.
Opinions about an article or post
We at Game8 thank you for your support.
In order for us to make the best articles possible, share your corrections, opinions, and thoughts about "Demise Boss Guide: How to Beat The Final Boss" with us!
When reporting a problem, please be as specific as possible in providing details such as what conditions the problem occurred under and what kind of effects it had.