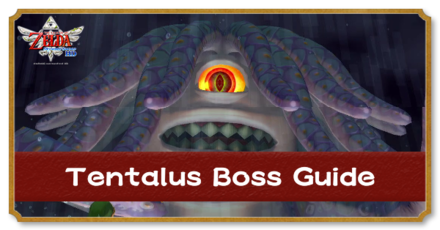 This is a guide for Tentalus, the boss at Sandship
in The Legend of Zelda: Skyward Sword HD for the Nintendo Switch. Read on to learn strategies for how to beat Tentalus, see Tentalus's moves, and learn rewards for beating them!

Slash his 4 tentacles with Skyward Strike

To defeat Tentalus, you need to cut off his four tentacles that extend from below. This tentacle is the same as the one that came out just before, and you can cut it off by hitting Skyward Strike. You can move around while Skyward Strike is recharging, so be sure to move so that you are not caught by the tentacles.

Shoot at Tentalus' eye with a bow

If you cut off all four tentacles, Tentalus will appear. During this time, if you shoot at his eye with a bow, Tentalus will get knocked down and take damage. His tentacle slam attack will hit you, so aim after the slamming is over.

Arrows will be dropped by the tentacles

Arrows will be dropped when the tentacles are cut off, so collect them when you can.

Attack his eye while he's down

If you hit the arrow on the eye of Tentalus, he will get knocked down and be damaged. The tentacles on his head can be cut off without using Skyward Strike.

If Tentalus begins to rampage, use a crate to escape

Even if all the scaffolding is destroyed, the game will not be over, and even if you fall into the sea, you can retry with no damage taken.

2nd Phase: Shoot with a bow after he swipes at you with his tentacles

In the second half of the match against Tentalus, Tentalus will remain visible, but will launch a long-term attack using the tentacles of his head. After the attack, you will still have a chance, so shoot his eye with your bow and make sure he gets knocked down in the first half of the phase.

The tentacles extending from below will hit you. You can avoid it if you don't get close and run backwards, so move away diagonally while charging up the Skyward Strike.

The tentacles that extend from below also use grab attacks. Like a tentacle attack, you can avoid it if you do not approach it and escape straight backwards.

Break free when you are grabbed

Throw is an attack that happens when you can't break free when Tentalus grabs you. There is no damage to the grab itself, but if you are thrown you will be damaged, so be sure to move around to free yourself.

If he swings, dash left and right

Tentacle slam is an attack used when Tentalus is appearing. It is unavoidable to move left and right while holding a bow or sword, so avoid it with a dash.

Cut off the tentacles

During the second phase, Tentalus will attack with the tentacles on his head. This tentacle can be slashed by swinging its sword, so slash him until he stops.

In order for us to make the best articles possible, share your corrections, opinions, and thoughts about 「Tentalus Boss Guide: How to Beat Tentalus | Zelda: Skyward Sword HD (Switch)」 with us!