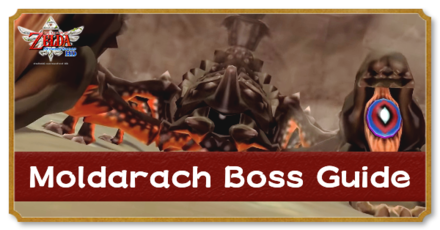 This is a guide for Moldarach, the boss at Lanayru Mining Facility, Shipyard
in The Legend of Zelda: Skyward Sword HD for the Nintendo Switch. Read on to learn strategies for how to beat Moldarach, see Moldarach's moves, and learn rewards for beating them!

Moldarach has a weak point on the eyes attached to his pincers, which you can hit according to the direction of the pincers.

When he dives in the sand, use Gust Bellows

Moldarach occasionally dives into the sand. You will then be attacked from behind, so use the Gust Bellows to blow off the lump of sand and stab it on its eye.

Stab the eye on his body after destroying both pincers

Breaking all the pincers reveals Moldarach's last weakness. In this state, only stab attacks are effective, so fire stab attacks in rapid succession.

Moldarach attacks whenever his eyes (on his pincers) turn red. If you keep your distance, you won't get hit. So if you see his eyes turn red, make sure you step backwards (focus on the enemy and use the A button + downwards motion on the joystick).

It is also recommended to attack and interrupt the weak points before being caught by the enemy.

A Slam attack is a technique derived from a Pinch Attack. If you do not resist while being grabbed, you will receive additional damage, so shake the remote control and shake it off.

If Moldarach tilts his tail, step back

When Moldarach's eyes turn red and tilts his tail a lot, he will swing his tail. This attack has a long horizontal range, so it is recommended to backstep to escape out of range.

When you destroy one of Moldarach's pincers, use a stab attack at his eyes. If your eyes turn red with your tail up, it's a signal for this attack, so move left and right to avoid it.

Use Shield Attack or Repel at the right time

When Moldarach closes his eyes and folds his tail, he will do a Rush Attack. This attack is difficult to avoid by stepping because the enemy's tracking ability is high.

Defeat Moladarach before the Rush Attack or use a shield and repel it a moment after he folds his tail.

In order for us to make the best articles possible, share your corrections, opinions, and thoughts about 「Moldarach Boss Guide: How to Beat Moldarach | Zelda: Skyward Sword HD (Switch)」 with us!