Who Should You Pull?
★ Legendary Heroes: Chrom
☆ Double Special Heroes 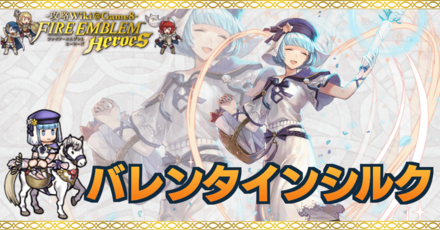 This is a ranking page for the hero Silque - Selfless Cleric from the game Fire Emblem Heroes (FEH). Read on to learn the best IVs (Individual Values), best builds (Inherit Skill), weapon refinement, stats at Lv 40, and more for Valentine's Silque.

As a hero obtainable only through Tempest Trials, Valentine's Silque has no access to IVs. This means that this unit will always have base stats when obtained, with no flaws or assets.

As a unit only obtained through Tempest Trials, Valentine's Slique will not have access to IVs. This means that when not accounting for skills, the stats she has will always be her base stats.

Valentine's Silque's weapon cannot currently be refined. This section will be updated if it becomes refineable in the future!

Valentine's Silque is a ranged magic attacker (range = 2). Therefore, if given Wrathful Staff, the amount of damage she deals will be equivalent to her Atk minus the foe's Res stat.

Grants buffs to the speediest ally

Silques default skills will grants multiple buffs to the ally on the team with the highest Spd stat. Regardless of where she is on the map, Rapport Wand's effect will give Atk/Def+5 and Spd Opening will give Spd+6 to her ally, so just having her on the team allows her to provide support. In particular, this works super well with blade users.

Being a cavalry unit is excellent for staff users, as she can quickly get to distant allies and heal them. In adition, she can take advantage of cavalry only skills like Goad Cavalry, making her an excellent addition to an all-cavalry party.

With her low Spd stat, V!Silque will have to endure many follow-up attacks. Her defensive stats are decent, but not good enough to stop her from taking massive damage from foes who can gain folloq-up attacks. Either try and keep her out of the range of enemy attacks or change her build to give her more skills that allow for tanking.=

As a cavalry unit, however, Sique takes 1.5x damage from weapons that are effective on cavalry, such as Ridersbane. Be sure to keep an eye on your foes' weapons, and avoid getting to close to this type of foe as often as possible.

Should you Unlock Potential for Valentine's Silque?

Valentine's Silque as a Source Hero

V!Silque can be used to inherit Rapport Wand+ or Spd Opening. However, since this unit is obtained through Tempest Trials only, the amount you can obtain is somewhat limited. Therefore be sure to put a lot of consideration into which units will inherit these skills.

How to Get Valentine's Silque / Illustrations / Voice Actor / Quotes

How to Get Valentine's Silque

Valentine's Silque is a limited time Hero who can be obtained as a reward for your score in the Tempest Trials. They do not appear in regular summons. After the event has ended, they can be obtained by using Heroic Grails.

Register as a member and get all the information you want. (It's free!)
Login
Opinions about an article or post go here.
Opinions about an article or post
We at Game8 thank you for your support.
In order for us to make the best articles possible, share your corrections, opinions, and thoughts about "Valentine's Silque Rating and Best Builds" with us!
When reporting a problem, please be as specific as possible in providing details such as what conditions the problem occurred under and what kind of effects it had.