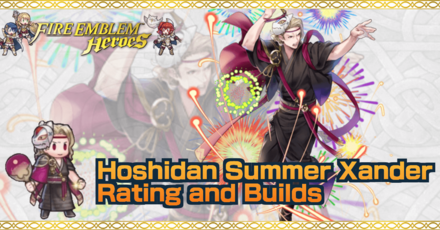 This is a ranking page for the hero Xander - Dancing Knight from the game Fire Emblem Heroes (FEH). Read on to learn the best IVs (Individual Values), best builds (Inherit Skill), weapon refinement, stats at Lv 40, and more for Hoshidan Summer Xander.

The best IVs for Xander are +Def and -Res. A +Def IV helps him improve his role as a threat to physical units in the enemy phase. His Res is of less importance and its very low so it is safe to take as a bane.

Hoshidan Summer Xander is a ranged physical attacker (range = 2). Therefore, when not accounting for the Weapon Triangle, the amount of damage he deals will be equivalent to his Atk minus the foe's Def stat.

Dance is an assist skill that allows the target ally to take another action. Because of this, your allies can move and attack twice to take down foes, or attack and move back to the safe zone so that they won't be taken out during the enemy phase. It has high strategic value and it allows Hoshidan Summer Xander to become a part of many team compositions.

Strong Against Cavalry Units Plus an Additional Effect

Dusk Uchiwa+ deals bonus damage against cavalry units. It also disables skills that change attack priority. This makes Xander a possible counter to units like Lewyn, as he relies on the effects of Forseti, which changes attack priority, to effectively take foes down.

On top of all those, it also possesses the generic ability of daggers to debuff enemies. In the case of this weapon, it applies -7 Def/Res to target unit and all foes within 2 spaces of it.

Can counterattack at any range

Xander's A skill Close Counter means that he can counterattack foes from any range. Since this means he can counterattack close range foes, he does not have to worry about range when defending from an enemy attack. This is also quite a rare skill so it makes Xander a valuable unit. Its value in relation to Xander's kit is discussed below!

Xander has access to Quick Riposte 3 which means as long as he is at 70% HP or above, he will score a follow-up attack when attacked in the enemy phase. Combined with Close Counter, he makes for a solid unit in the enemy phase especially against physical units.

One tactic to use with Xander is to bait enemies into acting him in the enemy phase to activate the debuffs of Dusk Uchiwa+. You can then exploit the weakened defenses in the next player phase. Both Xander and his allies can exploit these said debuffs so attack away!

Xander's Res only sits at 20 at Lv.40. This makes it easy for magic users to take him out. Be mindful of Xander's positioning in relation to magical units that can easily take him out.

Should you Unlock Potential for Hoshidan Summer Xander?

Xander - Dancing Knight Only Appears as a 5 Star Hero!

How to Get Hoshidan Summer Xander / Illustrations / Voice Actor / Quotes

How to Get Hoshidan Summer Xander

Hoshidan Summer Xander is a limited time Hero who can be pulled from a Special Heroes Summoning Event. They do not appear in regular summons.

Register as a member and get all the information you want. (It's free!)
Login
Opinions about an article or post go here.
Opinions about an article or post
We at Game8 thank you for your support.
In order for us to make the best articles possible, share your corrections, opinions, and thoughts about "Hoshidan Summer Xander Builds and Best IVs" with us!
When reporting a problem, please be as specific as possible in providing details such as what conditions the problem occurred under and what kind of effects it had.