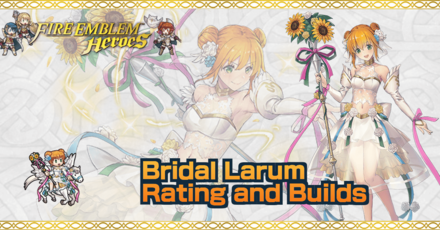 This is a ranking page for the hero Larum - Dancing Bride from the game Fire Emblem Heroes (FEH). Read on to learn the best IVs (Individual Values), best builds (Inherit Skill), weapon refinement, stats at Lv 40, and more for Bridal Larum. 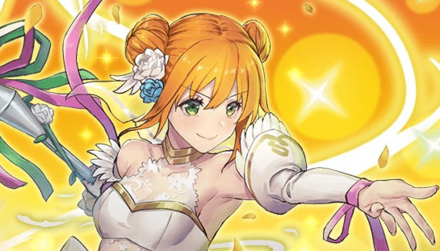 As a hero obtainable only through Tempest Trials, Bridal Larum will always have neutral IVs by default. The only way to access IVs for this unit is through using Trait Fruits.

Bridal Larum's best IVs are +Spd and -HP. Her Spd is quite good at base 40 and boosting it can prevent her from receiving follow-up attacks from her enemies.

Taking HP as a bane reduces it to base 35. This can potentially lead to her using Escape Route 3 to provide refresher mobility map-wide after taking one attack. If using Wings of Mercy instead, take a -Def or -Res bane.

We recommend +Spd when merging Bridal Larum up to +10 for similar reasons above. Spd is her most important stat and should be boosted as much as possible.

Using It's Curtains...+, Bridal Larum can pre-charge Ruptured Sky to help dent an enemy if using Dance isn't an option. The trio of Wings of Mercy, Guidance, and Aerobatics provide great utility for a support unit like Larum.

A budget build can also be used to have Bridal Larum provide dancer and movement utility to the team.

Bridal Larum is a close physical attacker (range = 1). Therefore, when not accounting for the Weapon Triangle, the amount of damage she deals will be equivalent to her Atk minus the foe's Def stat.

This weapon grants Atk/Def+5 and an extra bonus to Atk and Def during combat equal to the current bonus on unit's Atk and Def respectively.

This weapon is great for improving Bridal Larum's physical bulk and may potentially have her survive attacks from bow units.

Bridal Larum is a free unit obtainable from Tempest Trials+. Receiving a flying refresher unit for free is always good.

She even comes with an uncommon mobility skill in Guidance 3!

Bridal Larum's base 32 Atk is terrible and shouldn't be relied upon to deal fatal blows to enemies unless given adequate support.

As a refresher unit, she shouldn't be attacking most of the time, but when she has to, do not expect positive results.

As a flying unit, Bridal Larum takes 1.5x damage from bows and weapons effective on flying units. Be sure to keep them out of the range of archers and leave them to other units.

We Recommend You Unlock Potential for Larum - Dancing Bride!

Bridal Larum as a Source Hero

However, as a flying refresher unit, Bridal Larum provides good utility for your barracks. Consider keeping one copy of her before foddering her off.

How would you rate Bridal Larum?

How to Get Bridal Larum / Illustrations / Voice Actor / Quotes

How to Get Bridal Larum

Bridal Larum is a limited time Hero who can be obtained as a reward for your score in the Tempest Trials. They do not appear in regular summons. After the event has ended, they can be obtained by using Heroic Grails.

Post (0 Comments)
Opinions about an article or post go here.
Opinions about an article or post
We at Game8 thank you for your support.
In order for us to make the best articles possible, share your corrections, opinions, and thoughts about "Bridal Larum Builds and Best IVs" with us!
When reporting a problem, please be as specific as possible in providing details such as what conditions the problem occurred under and what kind of effects it had.