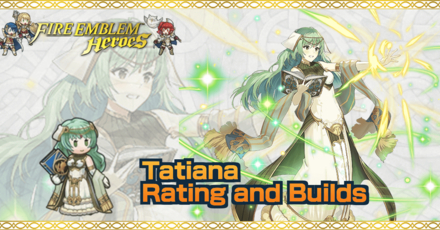 This is a ranking page for the hero Tatiana - Devoted Saint from the game Fire Emblem Heroes (FEH). Read on to learn the best IVs (Individual Values), best builds (Inherit Skill), weapon refinement, stats at Lv 40, and more for Tatiana.

The best IVs for Tatiana are +Spd and -Def. Higher Spd will allow her to nail follow-up attacks especially when running Spd-based skills. More importantly, it makes her less susceptible to follow-up attacks. In some situations, it improves her damage against units that run Spd-based damage reduction.

Her Def is very low, and she shouldn't be taking attacks from physical units in the first place so this is the best bane she can take.

We recommend a +Atk IV when merging Tatiana to 10. This is for the same reasons as above. With +10 merges, Tatiana's Spd stat will reach 41.

You can also go for +Res at +10 Merges. It is a superboon, and with it she can reach 48 Res, making her very tricky to take down with magic.

This is a build designed to give Tatiana the most points in Arena. These premium skills will increase her overall bulk against mages, and taking advantage of Atk/Res Bond 3 will make her deal more damage when Blue Flame triggers. Take the Res refine of Pact Blooms+ to make her sturdier. For her Assist skill, any dual Rally should work to score the most points.

This is an offensive build for Tatiana. Because of Special Spiral 3, she'll be able to trigger Glimmer (or Moonbow, if you would like a budget option) again and again when she attacks. Take Flora Guide+'s Spd refine to help her double and pair it with Atk/Spd Solo's double stacking.

This is a build that makes Tatiana a study wall against mages. Mirror Stance 3 ups her Atk and Res, while Quick Riposte 3 ensures that she can have a follow-up attack. Use Pact Blooms+'s Res refine to further boost her Res and Mystic Boost 3 to stack the healing with her weapon.

This is a budget magic tank build for Tatiana with her base kit and minimal skill inheritance. Take Blárrabbit+'s Atk or Res refine to make Tatiana hit harder when Iceberg triggers.

Tatiana is a ranged magic attacker (range = 2). Therefore, when not accounting for the Weapon Triangle, the amount of damage she deals will be equivalent to her Atk minus the foe's Res stat.

Tatiana's weapon, Blárrabbit+ gives her Atk/Res+5 in her first combat in player phase or enemy phase.

Paired with her high Res and the fact that she has Swift Stance 2 for the enemy phase, she can be a decent magic tank and also be able to counterattack with high firepower.

It will also restore 7 HP to her after combat, giving her some survivability. 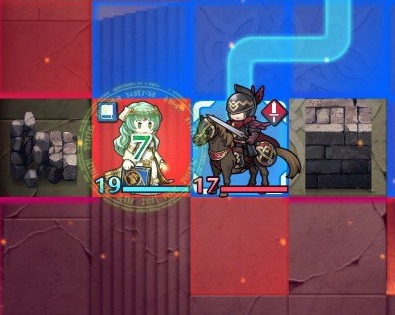 This will definitely come in handy in heated fights!

Though Tatiana debuts with Blárrabbit+, you can make an argument that this tome is better off with another unit. If you are to make use of her in the long run, we suggest inheriting powerful skills onto her to help her contribute to your team more.

We also recommend getting merges whenever possible!

Tatiana's Def only sits at 15 at Lv. 40. Even though she can take less magic damage when initating with Blárrabbit+ and Swift Stance 2, you should still pay attention to powerful green physical attackers that can easily take her down.

Tatiana - Devoted Saint Only Appears as a 5 Star Hero!

Tatiana as a Source Hero

All of Tatiana's skills have inheritance value!

How to Get Tatiana / Illustrations / Voice Actor / Quotes

How to Get Tatiana

Tatiana is a Hero who can be pulled from any summon.

Register as a member and get all the information you want. (It's free!)
Login
Opinions about an article or post go here.
Opinions about an article or post
We at Game8 thank you for your support.
In order for us to make the best articles possible, share your corrections, opinions, and thoughts about "Tatiana Builds and Best IVs" with us!
When reporting a problem, please be as specific as possible in providing details such as what conditions the problem occurred under and what kind of effects it had.