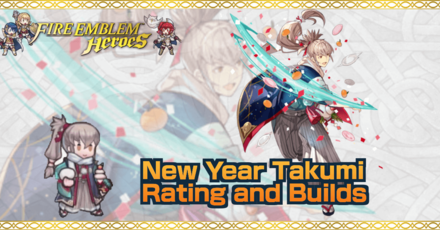 This is a ranking page for the hero Takumi - Prince of Soup from the game Fire Emblem Heroes (FEH). Read on to learn the best IVs (Individual Values), best builds (Inherit Skill), weapon refinement, stats at Lv 40, and more for New Year Takumi.

The best IVs for New Year Takumi are +Spd and -Def. A higher Spd stat allows Takumi to prevent follow-up attacks against him and helps him make follow-up attacks on his own. This boosts both his offensive and survivability capabilities. His low Def is of less importance, so it is safe to take Def as a bane.

New Year Takumi is a ranged physical attacker (range = 2). Therefore, when not accounting for the Weapon Triangle, the amount of damage he deals will be equivalent to his Atk minus the foe's Def stat.

Kagami Mochi+ is the first dagger with a 'Slaying' effect

Kagami Mochi+ possesses the standard effect of dagger weapons inflicting debuffs after combat. In the case of Kagami Mochi+, it inflicts -7 Def/Res on target unit and all foes within 2 spaces of target. It also accelerates Takumi's special trigger by 1 counter. This means that Moonbow will only have a cooldown of 1. This allows for consistent special activations that greatly increase Takumi's damage.

Bowbreaker gives him an edge against bow units

Setsuna is a fierce opponent against bow-wielding units, thanks to his passive skill Bowbreaker 3. Being able to take on bow units, who are very high in number in this game, is a huge advantage for him.

Atk/Res Bond 3 increases New Year Takumi's Atk and Res by +5 if he is adjacent to an ally. Since it is an in-combat buff, it stacks with other combat buffs, so it is good to pair with units that have skills like Atk Tactic 3 or Spur Def 3. Additionally, it does not make him susceptible to the effects of Panic Ploy 3 and Chill Atk 3.

This skill improves upon New Year Takumi's decent Res stat allowing him to be a good match-up against many magic units.

New Year Takumi's Def is only 17 at Lv. 40. This makes him very weak in taking physical attacks. However, he does have a good Spd stat of 34. Be wary of Brave weapons though! As they can still nail 2 hits on Takumi regardless of Spd.

Should you Unlock Potential for New Year Takumi?

Takumi - Prince of Soup Only Appears as a 5 Star Hero!

New Year Takumi can be used to inherit the skill Atk/Res Bond 3. However, New Year takumi is a special hero that you can only get from specific gachas. Please think carefully before fodderring him off.

How to Get New Year Takumi / Illustrations / Voice Actor / Quotes

How to Get New Year Takumi

New Year Takumi is a limited time Hero who can be pulled from a Special Heroes Summoning Event. They do not appear in regular summons.

Register as a member and get all the information you want. (It's free!)
Login
Opinions about an article or post go here.
Opinions about an article or post
We at Game8 thank you for your support.
In order for us to make the best articles possible, share your corrections, opinions, and thoughts about "New Year Takumi Builds and Best IVs" with us!
When reporting a problem, please be as specific as possible in providing details such as what conditions the problem occurred under and what kind of effects it had.