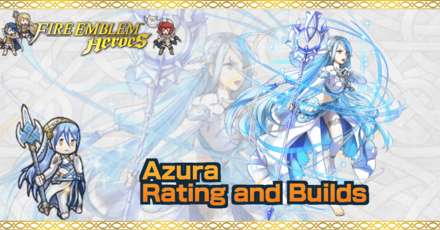 This is a ranking page for the hero Azura - Lady of the Lake from the game Fire Emblem Heroes (FEH). Read on to learn the best IVs (Individual Values), best builds (Inherit Skill), weapon refinement, stats at Lv 40, and more for Azura.

Our recommended IVs for Azura are +Spd and -HP. Since Azura will primarily be used as a support unit based around her skill Sing, and this unit can be extremely useful regardless of her IVs, but it is important to keep her alive. Therefore, having a higher Spd stat means that she will be less likely to take follow-up attacks, thereby decreasing the amount of damage she will need to endure.

With her low Def stat and super bane in Res, there are two flaws that would be best avoided. Considering she should primarily only be attacking foes that she has weapon advantage over, a lowered Atk stat is a decent flaw, but -HP is the most ideal.

This skill set makes use of Azura’s incredible Spd stat. Azura with a Spd boon will have a Spd of 42 when initiating combat, allowing her to double on most units. On top of that, equipping her with Moonbow with its low cool down count will allow her to deal extra damage on almost any attack. For her C slot, use a hone or support skill that will most benefit your party.

Through the effects of Sapphire Lance and Fury, Azura becomes very powerful against red units. Wings of Mercy is the recommended B skill as it will allow her to warp to an ally with low HP, but breaker skills can be used if you desire a more offensive option.

This build uses Distant Counter, and is recommended for dealing with the large amount of tome wielders in Arena Battles. With her high Res stat, Azura can withstand magic attacks and easily combat those of red and blue mages. Her B and C slots are a bit flexible, and depending on the party you are using, you may wish to use a breaker skill, Wings of Mercy, or Escape Route.

Azura's weapon currently cannot be refined. This section will be updated if it becomes refinable in the future.

Azura is a close ranged physical attacker (range = 1). Therefore, when not accounting for the Weapon Triangle, the amount of damage she deals will be equivalent to her Atk minus the foe's Def stat. In addition, she has an assist skill that can gratn additional movement to allies who have completed their turn.

Azura has the skill Sing, which grants an additinal action to an ally who has already finished their turn. Sing can be used to attack multiple times, or to attack and then flee the danger area, making it an extremely useful skill in nearly any party.

Weapon skill gives her an advantage over red units

Azura;s weapon skill Sapphire Lance+ furthers her advantage over red units. In addition to decreasing the damage she will take from a red unit, it also greatly increases the damage that she deals to a red unit.

Can buff her allies through Fortify Res 3!

Azura's skill Fortify Res will increase her allies' resistance stat. Simply starting next to Azura will insure a rather decent Res buff of +4 to boost your defense against those mages and dragons.

A combination of low defensive stats and her weapon Sapphire Lance+ makes her extremely weak to green units. Be sure to keep her out of reach from these units that could make quick work of her.

Her low defense stat means that she does not fair well against physical attacks, so you should keep her away from battle unless she is up against someone with weapon disadvantage. In particular, keep her far away from units with skills like Brave weapons, as they will get guaranteed follow-up attacks.

Should you Unlock Potential for Azura?

Azura - Lady of the Lake Only Appears as a 5 Star Hero!

Azura as a Source Hero

You may wish to inherit Azura's skill Sapphire Lance+. However, as a very useful singer, we recommend you keep at least one Azura for your when you need her.

How to Get Resplendent Azura / Illustrations / Quotes

How to Get Resplendent Azura

Resplendent Azura can be obtained by buying a FEH Pass. After the distribution period has ended, they can also be purchased by FEH pass subscribers.

How to Get Azura / Illustrations / Voice Actor / Quotes

How to Get Azura

Azura is a Hero who can be pulled from any summon.

Register as a member and get all the information you want. (It's free!)
Login
Opinions about an article or post go here.
Opinions about an article or post
We at Game8 thank you for your support.
In order for us to make the best articles possible, share your corrections, opinions, and thoughts about "Azura Builds and Best IVs" with us!
When reporting a problem, please be as specific as possible in providing details such as what conditions the problem occurred under and what kind of effects it had.