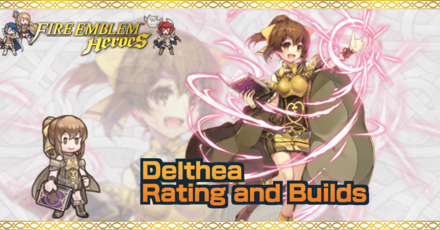 This is a ranking page for the hero Delthea - Free Spirit from the game Fire Emblem Heroes (FEH). Read on to learn the best IVs (Individual Values), best builds (Inherit Skill), weapon refinement, stats at Lv 40, and more for Delthea.

The best IVs for Delthea are +Spd and -Def. With this IV, she will reach a Spd of 37 at Lv. 40 A higher Spd stat allows Delthea to prevent follow-up attacks against her and helps her make follow-up attacks on her own. This boosts both her offensive and survivability capabilities. This is fitting if you chooe to inherit Life and Death or Desperation onto her. Her low Def is of less importance, so it is safe to take Def as a bane.

We recommend the Special Effect Refine for Dark Aura

Dark Aura's original effect only grants Delthea's allies the bonuses. With the special effect refine, Delthea gets bonuses through a same trigger condition as well! This is a must get if you plan to use Delthea in the long run. A +5 Atk/Spd in both phases can not be ignored. With more investment, she will become a very reliable offensive unit.

Delthea is a ranged magic attacker (range = 2). Therefore, when not accounting for the Weapon Triangle, the amount of damage she deals will be equivalent to her Atk minus the foe's Res stat.

Dark Aura grants +6 Atk to melee heroes if they are adjacent to Delthea at the start of a turn. That is a wide range of units that Delthea can apply buffs on. This makes her versatile and able to easily fit in many types of line-ups.

This weapon also has access to a special effect refine that provides Delthea with some offensive buffs too!

Delthea's C Skill Drive Atk 2 will give a +3 Atk buff to her allies within 2 spaces. This lets her support allies just by being nearby, and equipping her with the Sacred Seal Drive Atk 2 or Spur Atk 3 can further increase the effects of this bonus.

Miracle can prevent her from being taken out

Her native special skill, Miracle, has a long cooldown but it saves her from an attack that will take her out. This can buy your team the opening to take out that enemy and save Delthea for many turns to come.

Dark Aura cannot buff ranged units. This makes her an iffy pick when building ranged-heavy lineups. Keep this in mind when building teams around Delthea!

Should you Unlock Potential for Delthea?

Delthea - Free Spirit Only Appears as a 5 Star Hero!

Delthea as a Source Hero

How to Get Resplendent Delthea / Illustrations / Quotes

How to Get Resplendent Delthea

Resplendent Delthea can be obtained by buying a FEH Pass. After the distribution period has ended, they can also be purchased by FEH pass subscribers.

How to Get Delthea / Illustrations / Voice Actor / Quotes

Delthea is a Hero who can be pulled from any summon.

Register as a member and get all the information you want. (It's free!)
Login
Opinions about an article or post go here.
Opinions about an article or post
We at Game8 thank you for your support.
In order for us to make the best articles possible, share your corrections, opinions, and thoughts about "Delthea Builds and Best IVs" with us!
When reporting a problem, please be as specific as possible in providing details such as what conditions the problem occurred under and what kind of effects it had.