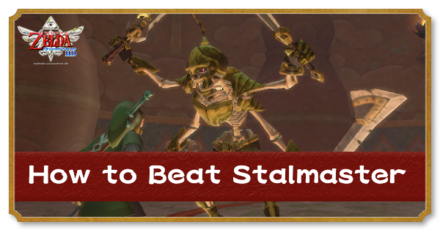 This guide will show you how to beat Stalmaster, an enemy in the Legend of Zelda: Skyward Sword HD for the Nintendo Switch. Read on to learn where to find Stalmaster, drops for beating it, as well as strategy for beating it.

Much like when fighting the Stalfos, players want to focus their attacks on the hole in the Stalmaster's defense.

Attacking the Hole in the Defense

The Stalmaster will repel all attacks that hit its sword so players want to attack the opening in its defense. After a few guarded slashes the Stalmaster will unleash a powerful counter attack, so attack carefully.

Do Not Attack Recklessly

If the player slashes recklessly and does not respect the Stalmaster's swords, the Stalmaster will enter its ultimate defensive state and protect its body in all directions. If players attack while the Stalmaster is in this state, they will be met with a powerful counter attack.

If the Stalmaster enters this state, just wait it out and attack when it opens its arms again.

If players can meet Stalmaster's attacks with a Shield Bash, the enemy will be temporarily frightened and be open for attacks.

The timing of the Shield Bash is tough to get as you need to input it later than you might think.

If the Stalmaster is hit by the blastwave of a bomb, its arms will temporarily fall off, leaving it open to attacks.

Bomb detonate slowly so we recommend that you plan the explosion to combo with your normal attacks.

Register as a member and get all the information you want. (It's free!)
Login
Opinions about an article or post go here.
Opinions about an article or post
We at Game8 thank you for your support.
In order for us to make the best articles possible, share your corrections, opinions, and thoughts about "Stalmaster Locations and How to Beat" with us!
When reporting a problem, please be as specific as possible in providing details such as what conditions the problem occurred under and what kind of effects it had.