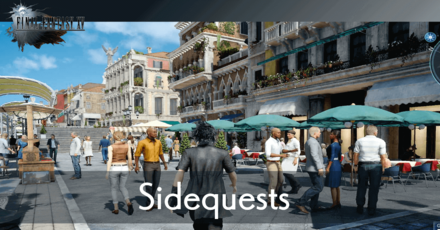 This page lists all the available sidequests in the game Final Fantasy XV (FF15, FFXV). Read on for more information about the sidequests and the recommended level needed!

Rescue Missions are short and easy sidequests. Your goal is to help those people in need by giving them the specified recovery item, either a potion or an antidote.

In Broken Cars Missions, the objective is to assist stranded drivers. To help them, you'll be needing your Repair Kit. Make sure to bring several Repair Kits during this mission. You can purchase it at Hammerhead's Mini-mart, as well as Mini-marts at all three Coernix Stations.

A Scrap of Mystery is a treasure hunt that takes you on a near-complete tour of Lucis. This mission is quite challenging; it has no prompt or highlight that will help you locate the Mystery Map unless you are standing next to them.

Photo Ops are short sidequests requested by Prompto. To finish this, you will need to take memorable pictures for him. Take note that you can only do this mission during daylight hours.

Tours are short sidequests involving unique moments shared by Noctis and his friends when they stay at specific havens. This sidequest will be available upon reaching the appropriate Haven.

Dave's Quests are all about collecting Dog Tags. Defeat the enemies that you will encounter, and bring the Dog Tag to Dave at the Longwythe Rest Area.

Cid's Quests are all about upgrading some weapons. Find the materials that Cid needs, and he will help you modify your weapon in return.

After you have received your first Royal Arms during the Second Chapter, speak with Takka to begin Takka's Quests. Take note that you need to move 500 feet away from Takka after completing a quest for the next one in the series to unlock.

Dino's Quests are all about collecting various Gems. Talk to Dino to begin the sidequest. You can find him at Galdin Quay docks sitting on a bench.

Cindy's Quests are about upgrading Regalia in many ways. You can change the appearance and its performance. Once you complete The Power of Kings (Chapter Two), you can visit Cindy at Hammerhead to begin this sidequest.

Sania’s Quests are about collecting Passive Fauna, which includes unique types of frogs. Start the sidequest by speaking with Sania at Coernix Station - Alstor. Take note that she moves to different locations after completing each mission.

Navyth’s Quests are all about fishing. Start practicing and upgrade your fishing equipment. To begin the sidequest, speak with Navyth at the Alstor Slough fishing spots.

Vyv’s Quests are all about visiting and taking pictures of specific locations. Speak with Vyv to begin the sidequest.

Lestallum Merchants are sidequests from four merchants. You can access this sidequest after completing a tour of Lestallum with Iris during Chapter three.

Holly's Quests are all about fixing valves and checking the lights at Lestallum Power Plant area. To begin, meet and speak with Holly during Chapter eight.

Chocobo Quests are numerous of activities related to Chocobos. You can found those activities around Wiz Chocobo Post.

Wiz's Quests are mostly about Chocobos. After completing A Behemoth Undertaking hunt, Wiz will offer you a sequence of assignments.

Allies and Miscellaneous are various sidequests mostly from your allies.

Royal Tombs and Dungeon are various sidequests you can find from a dungeon and exploring the royal tomb. When you enter one of them, the sidequest will begin.

Menace Beneath Lucis is a quest with various sidequests related to Menace dungeons.

Randolph's Quest is a sidequest you can access after you finish the Main Story mode. Your goal is to defeat the monsters and/or bring item drops to Randolph. To begin this sidequest, visit Randolph in Lestallum by loading your Chapter five save file and return to Lucis using Call Umbra. 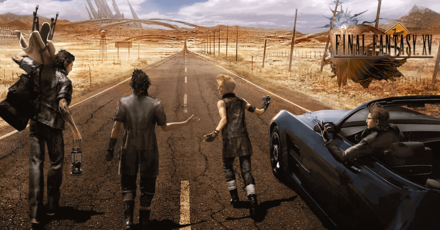 Register as a member and get all the information you want. (It's free!)
Login
Opinions about an article or post go here.
Opinions about an article or post
We at Game8 thank you for your support.
In order for us to make the best articles possible, share your corrections, opinions, and thoughts about "List of All Sidequests" with us!
When reporting a problem, please be as specific as possible in providing details such as what conditions the problem occurred under and what kind of effects it had.