This is the character sheet page for Weskham in the game Final Fantasy XV (FFXV, FF15). Consider this a comprehensive list of a character's stats and skills. Read on for more information on characters like Noctis and company! 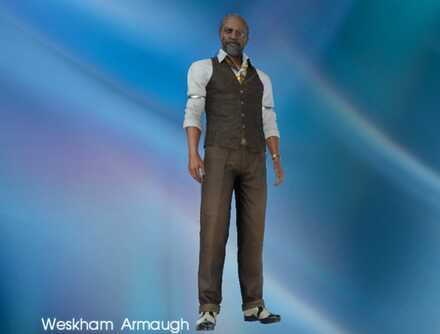 Regis's longtime friend and close confidant. He accompanied the late king as diplomatic advisor on his cross-continental journey thirty years ago. Their mission: to rebuild an alliance with the nation of Accordo in hopes of fighting back against the rapidly militarizing Niflheim Empire.

A grave injury incurred in the field forced Weskham to withdraw from the group, however, and he remained in Altissia to undergo treatment while the others returned to Lucis. Since then, he has opened up a café-on-the-water in the city he now calls home, as well as forged a friendship with the first secretary herself, Camelia Claustra.

In order for us to make the best articles possible, share your corrections, opinions, and thoughts about 「Weskham Character Information | FFXV」 with us!