How to Use Summons | FFXV

You will have to obtain the Summons from different chapters in the game before you can use them in battle.

A prompt will show on the screen when a Summon becomes available to use. To use the Summon, press and hold the L2 button. 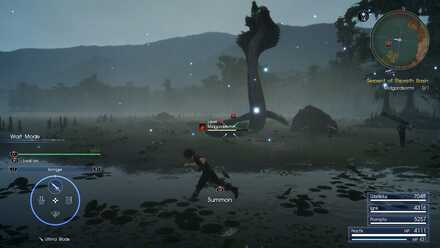 Summons deal massive damage to all enemies in the field and is capable of ending most battles immediately due to their sheer strength.

The aftermaths of their attacks will also leave temporary environmental effects (Summoning Ramuh will scorch the ground around the area).

The Summon system in Final Fantasy XV is quite different from the other Final Fantasy games. Each summon has its own requirement that you need to meet before you can have the chance to use them in battle.

Generally, the chances of getting an opportunity to use a Summon increases the longer the battle is being fought.

The chances of summoning Titan increases the more allies are in Danger or Down states.

Titan will not appear if there is not enough room around the battle zone.

Summoning chances for Ramuh increases the longer the battle is fought.

Ramuh can appear anywhere, making him the easiest to summon of all the Astrals.

The chances of Leviathan lending you her aid increases the longer Noctis is in Danger state.

Leviathan can only be summoned in areas with large bodies of water nearby.

Shiva will most likely to be summoned the more party members are in Danger or Down states.

Shiva can be summoned almost annywhere as long as the area has enough space.

Bahamut can only be summoned during a battle in Chapter 14 and cannot be summoned anywhere else.

In order for us to make the best articles possible, share your corrections, opinions, and thoughts about 「How to Use Summons | FFXV」 with us!