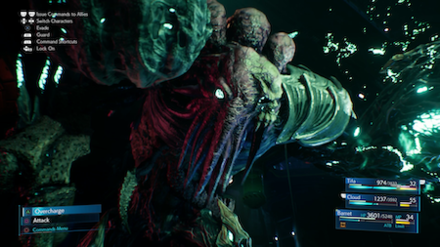 This is a guide to beating the Boss Specimen H0512 in the game Final Fantasy 7 Remake (FF7R). This article explains Specimen H0512's attack patterns, weaknesses, and tips and strategies for defeating it on both Normal and Hard Mode.

A monster created by Shinra's R&D Division. Highly adaptable, it evolves during battle, where it exhibits extraordinary offensive and restorative capabilities.

How to Stagger Specimen H0512

No Enemy Skills can be learned from Specimen H0512.

Cloud should serve as the main attacker, countering attacks like Rend with Punisher Mode. Don't try to dodge away from attacks, as you won't be able to make it out of the way in time. Counter its attacks and bring the heat after you've Staggered it.

Focus on attacking its left claw and continue attacking it until it is staggered then let out your most damaging attacks. Increase the stagger damage by using Cloud's Infinity's End and Tifa's True Strike.

Since Cloud is your main attacker for this battle, you'll need to have him deal with the status effects from Mako Expulsion and Noxious Expulsion, which is why the Warding materias are paired with Poison and Time materias. You can also cast Haste from the Time materia to himself so he can unleash punishing abilities in quick succession. Remember to focus your attacks on the claw first.

Tifa will be your support this time. Cast Barrier to Cloud as soon as possible to make him endure more attacks from Specimen H0512. The First Strike materia will help you cast it sooner. If an ally needs healing, fill half of her ATB Gauge then use ATB Boost to completely fill it, then cast Cure. If her Magic Attack is high, Cure or Cura should be enough to restore a significant amount of HP. If you use another ability other than Barrier and Cure, the boost from Skill Master will be triggered, increasing your ATB gauge.

Your long range support Barret should be able to deal more damage with the Synergy and Elemental materias while you use Cloud. You can also pair these materias with Ice if it has a higher level than your Fire materia. Cast Silence on H0512-OPTs if their magic attacks are bothering you.

If you have the chance to summon, you can pick either Ifrit and focus the summon skills on Specimen H0512 or Fat Chocobo to deal with the H0512-OPts at the same time. You cannot summon Leviathan in this fight since the battle area does not have enough space. 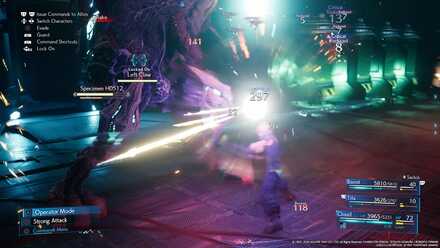 As Specimen H0512 mostly uses melee attacks with its Claws, most of its attacks can be countered using the Auto-Counter feature of Cloud's Punisher Mode. When it readies an attack like Rend, hold R1 to block, and Cloud will strike back with gusto.

Aim for the Claws 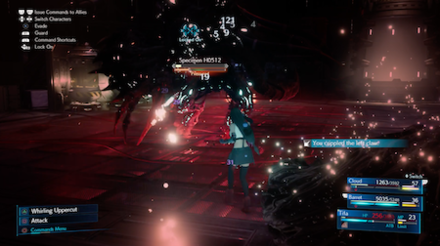 Specimen H0512 mostly attacks using its two massive Claws, and its Abilities like Rend and Seize are reliant on them. By crippling both of these, you can render it largely unable to attack. On the other hand, keep in mind that crippling the claws will add to the Focus Gauge, but not automatically cause Staggering.

It's not necessary to attack the Claws to finish the fight, but like many other bosses with multiple targets, doing so will make the battle go much more smoothly. 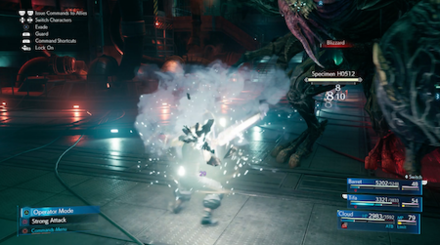 Unlike other fights with multiple opponents such as Enigmatic Spectre, there's no need to take out the smaller foes to deal damage to the main opponent. By Silencing them, you can leave them unable to use Magic attacks like Fire and Blizzard, and render them inert during the battle.

If you've Silenced the H0512-OPTs, you won't have much to deal with in the way of Magic, so you'll mostly only have to worry about physical attacks. Set up Barrier on Cloud, so that he can continue wailing on Specimen H0512 while taking reduced damage from its hits. 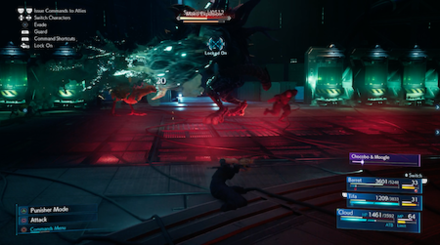 Specimen H0512's Mako Expulsion attack can inflict Slow on your party members. Be sure to get rid of Slow as soon as possible, so that you'll have enough ATB to cure the Poison effects and continue using Abilities and Magic. If you've got a Time Materia equipped, you'll be able to cast Haste on your party members to cancel out the effects of Slow.

How to Get the Time Materia

Watch out for Apoptosis 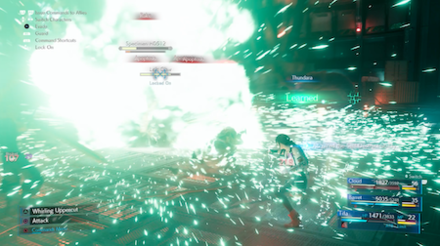 In the second phase of the battle, the H0512-OPTs will begin to self-destruct, and can seriously hurt your party if you're not ready for it. Be sure to dodge out of the way when the Apoptosis Ability name appears over their heads.

That said, you can also acquire the Self-Destruct Enemy Skill from being hit by Apoptosis, so be sure to send in your character equipped with the Enemy Skill Materia to take at least one of these blows.

Have Cleansing Equipped For Resist and Esuna

Having Cleansing equipped can be a huge help against Specimen H0512. It will constantly use its poison and slow attack. Casting Resist ASAP will make sure you will not have to worry about any of those attacks.

Equipping Elemental linked with Fire or Ice can help with ignoring H0512-OPTs. At Lv.3 of Elemental, you can even purposely get hit to recover some health.

Post (0 Comments)
Opinions about an article or post go here.
Opinions about an article or post
We at Game8 thank you for your support.
In order for us to make the best articles possible, share your corrections, opinions, and thoughts about "How to Beat Specimen H0512 | Boss Fight Guide (Normal & Hard)| FF7 Remake" with us!
When reporting a problem, please be as specific as possible in providing details such as what conditions the problem occurred under and what kind of effects it had.