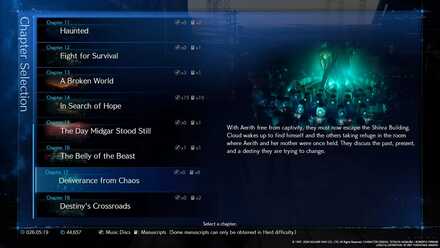 Here you can find a list of all unlockables that become available after clearing the main story of Final Fantasy 7 Remake (FF7R). Rather than New Game Plus, Post-Game content consists Hard Mode, Chapter Select, and harder Battle Simulations! Learn how to 100% Clear the game and what to do after beating the game.

Is There a New Game Plus?

There is a Pseudo New Game Plus

Final Fantasy 7 Remake doesn't offer a New Game Plus in the traditional sense, but instead gives you the option to change difficulties or revisit chapters to jump freely between them to clear the game 100%. While you could think of backing the game up to chapter 1 on hard difficulty with all of your old equipment as a pseudo New Game Plus, you will still be able to change chapters whenever you like, as well as difficulties.

For this reason, even if you passed up several missables on the first go around, you'll be able to pick them up after beating the game! 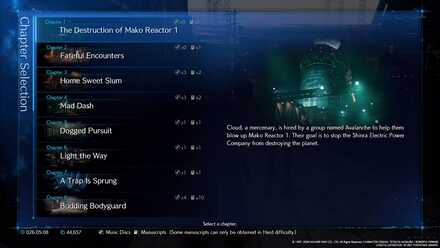 Clearing the main game unlocks the Chapter Select option. In Chapter Select, you can select any of the 18 chapters freely, and your characters' level, equipment and materia will be carried over, allowing you to power through FF7 Remake's version of New Game+.

After selecting a chapter, you will be asked which difficulty you want to play it on. Which brings us to...

Hard Mode will be added to your difficulty options.
In Hard difficulty, you can't use items, and rest stops only recover HP. In addition, new Manuscripts and Shinra Combat Simulator challenges are available.

When you use Chapter Select to play a part of the game again, you will gain double Exp and triple AP when defeating enemies.

These bonuses should make leveling your characters and Materia a lot easier!

Your new best friend if you're aiming for clearing the game 100%, the Play Log, will also be unlocked when you clear the game.

Here you can see pratical information like how many chapters you've cleared on hard, how many Manuscripts you've collected, and most importantly, whether you've unlocked all Cloud's dresses or not!

Like Chapter Select, it can be accessed from System in the Menu.

If you go back to Chapter 17 after clearing the game, Chadley will have new Battle Simulations available for you.

During the Bike mini-game, you can pause and skip it. It's a pretty long fight, so we think it's a nice end-game addition!

On defeating the Pride and Joy Prototype, you'll receive Gotterdammerung, far and away the best Accessory in the game. You'll also receive one of the game's two Gold Trophies.

Although it's often pointed out that Pride and Joy Prototype can only be fought on Hard Mode, there's no need to set the Chapter's difficulty to Hard. You can actually select the battle's difficulty setting individually, regardless of the game's current difficulty setting. In addition, there's no requirement to complete any of the other Corneo Colosseum or Shinra Combat Simulator battles on Hard.

Beat the Game on Hard Mode

After completing all 18 Chapters on Hard Mode, you'll unlock the Hardened Veteran Trophy. Hard Mode is extremely difficult, but also allows access to Weapon Level 6 and most of the Manuscripts available in the game, the majority of which are exclusive to Hard Mode.

Hard Mode is witheringly difficult, with both souped-up monsters and Bosses and new draconian restrictions. Consumable items cannot be used, and benches will no longer restore MP.

It can be a good idea to work on defeating Pride and Joy Prototype first, to pick up the highly useful Gotterdammerung before going full-on into Hard Mode.

Get All Characters to Level 50

In order to clear the game 100%, you'll need to raise each of your characters to Level 50. Doing so is also highly advised for finishing many of the other difficult challenges on this list, especially Hard Mode, so it's a good idea to go ahead and max out your characters' levels ahead of time.

Collect all the Manuscripts to Max Out Your SP 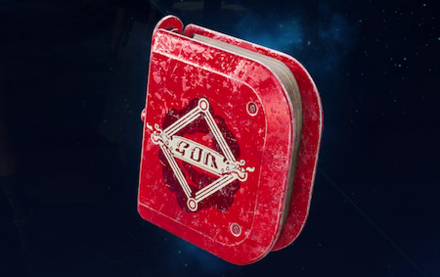 Simply raising your characters to Level 50 isn't enough to unlock Weapon Level 6. You'll need at least 4 Manuscripts to do so, and past that, there are a total of 10 other Manuscripts to find for each character. Once you've found every Manuscript for a character, you'll be able to unlock every upgrade for each of their weapons.

Although most of the Manuscripts are obtained by defeating Hard Mode Bosses, zooming through every chapter on Hard Mode isn't quite enough to get every Manuscript – you'll need to defeat many of the sub-bosses found in Side Quests as well. Check our complete guide to learn where each Manuscript is located.

Collect all the CDs

You can find CDs in Jukeboxes and Vending Machines throughout each chapter. After completing the game, you can check your total number of CDs from the Play Log. You'll be rewarded with a Silver Trophy for collecting all of them.

Locations of All CDs

Unlock all the Dresses

In Don Corneo's audition in Chapter 9, Cloud, Tifa, and Aerith will each wear one of three dresses. Based on your sidequest completion in Chapters 3, 8, and 9, you'll be able to decide which of the dresses each character will wear. Upon viewing all nine total possible dresses, you'll score a Silver Trophy.

How to Get All Dresses Guide

Learn all the Enemy Skills

Fans of the original FF7 will fondly remember the Enemy Skill Materia, which allows characters to learn new Abilities which Monsters against them. Although there were 24 Enemy Skills to learn in the original game, there are only 4 to learn this time around, though we're sure there will be more waiting in the parts to come! Obtaining all 4 will net you a Silver Trophy.

Meet every character in Chapter 14 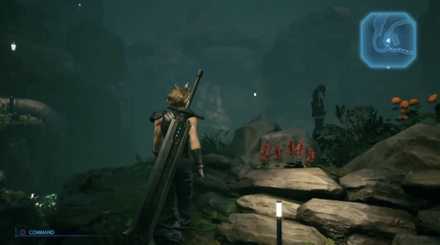 Based on your choices during the story, you'll be able to meet one of three characters in Aerith's garden in Chapter 14 – Tifa, Aerith, or Barret. This is reminiscent of how your in-game choices would lead to Cloud going on a ferris wheel ride with Tifa, Aerith or Barret in the original game, a scene which we're excited to see in future parts of the Remake.

The number of characters you've successfully met in this way is tracked in the Play Log, though you won't receive a trophy for meeting all three, so this achievement is recommended for full-on completionists only.

How to Get All Chapter 14 Resolutions

Fill Out your Enemy Intel 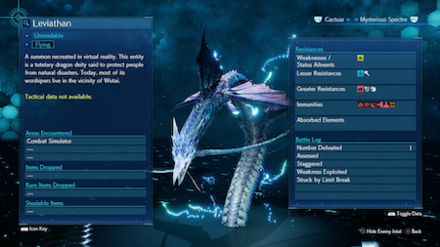 Using the Assess Materia, players can view a variety of useful information about enemies and Bosses, including weaknesses, Abilities, stealable items, and more. After assessing an enemy, this information will be permanently stored as Enemy Intel accessible from the menu.

Be sure to level up your Assess Materia to Level 2, allowing you to scan all enemies in a battle at once!

There's no reward available for getting Enemy Intel for all foes, but for real completionists, this is a must-have.

Locations of All Enemies

Is There a Secret Ending or Post Credits Scene?

As the game doesn't require you to complete the entire Play Log unlocked after clearing the game, some might be wondering if there's some sort of Secret Ending that hints at what's to come next. Unfortunately while directed by Tetsuya Nomura, this isn't a Kingdom Hearts game (or a Marvel movie, as there is no scene after the credits roll) so there is no Secret Ending. Completing the Play Log is solely for personal 100% completion of the game.

In order for us to make the best articles possible, share your corrections, opinions, and thoughts about 「Post Game Content | New Game Plus and How to 100% Clear the Game | FF7 Remake」 with us!