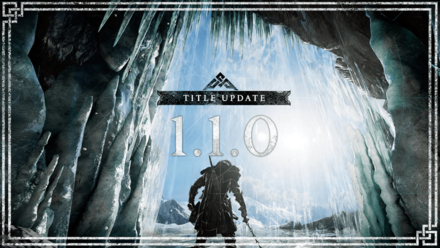 This is an info page for the 1.10 Update for Assassin's Creed: Valhalla. Read on to find out the fixes, gameplay changes, and performance updates below.

What is in the Update?

Similar to the 1.0.4 Update, the 1.10 Patch brings several changes to gameplay, performance, and balancing issues. It also brings with in-game support for Settlement expansion and the new Yule Festival, and various fixes to quests.

It is scheduled to release on December 15, 2020 on all platforms at the following times:

Update 1.10 contains quite a smaller number of changes to the game across multiple platforms.

While not as big as Update 1.0.4, the update will still take up a good amount of storage space on your console. Below are the download sizes for each platform.

Register as a member and get all the information you want. (It's free!)
Login
Opinions about an article or post go here.
Opinions about an article or post
We at Game8 thank you for your support.
In order for us to make the best articles possible, share your corrections, opinions, and thoughts about "Update 1.10 Patch Notes and Info" with us!
When reporting a problem, please be as specific as possible in providing details such as what conditions the problem occurred under and what kind of effects it had.