This page is a list of all the weapons in the game Assassin's Creed Valhalla (AC Valhalla). Read on to see the list of all weapons and learn how to get all the Legendary Weapons! 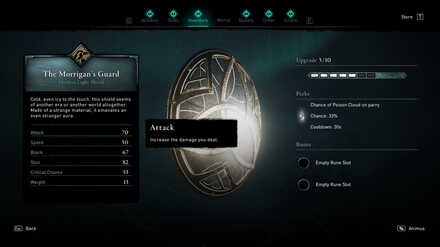 Each weapon in Assassin's Creed: Valhalla comes with a set of stats and upgrades. These stats dictate how the weapon performs and the upgrades make it possible to increase these stats so that your weapon is better.

Attack dictates how strong this weapons attacks are. This is the most noticable stat, as the higher the attack the easier it is to kill enemies.

Speed is the average speed of all the moves and combos of the weapon. The higher the speed, the faster its moves come out, meaning you can do more attacks in a shorter amount of time.

Stun increases the stun damage your weapon deals, which lowers the defense of the enemy. It makes every hit after that more effective.

Critical Chance is the chance to deal critical/bonus damage. Take note this is not a percentage, having a Crit stat of 100 doesn't mean every hit is a critical hit.

Weight determines how much stamina it takes to swing the weapon and dodge with it equipped. The higher the weight, the higher the stamina used.

The Headshot stat, only present in bows, determines how much damage you'll perform if you successfully hit an enemy's head with a ranged attack.

Unique to shields, the Block stat tells you how much stamina is used when blocking an attack with the shield.

Each weapon in Assassin's Creed Valhalla has a particular alignment it is attuned to. These alignments are meant to make it easier for you to follow a particular playstyle.

Having these weapons on top of partial or full sets of armor pieces in a particular branch will allow for set bonuses for a deeper dive into a particular style of play.

To find out which of the weapons are the best in terms of stats, check out our Best Weapons guides down below!

How to Improve Weapons

There are two ways to improve weapons in AC: Valhalla: Upgrades and Enhancements.

Upgrades are incremental stat increases. Each tier only has a certain number of upgrade slots however, and getting upgrades does not have any aesthetic bearing on your weapon.

Enhancements are cosmetic changes that don't directly affect stats, but they unlock more upgrade slots for weapons. You can tell the difference between enhanced weapons by their icon backgrounds as well.

Enhancing weapons costs Ingots and you must go to the smith in Ravensthorpe.

You can find enhanced weapons in chests that are already upgraded but not fully, but you cannot find Mythical weapons naturally aside from Legendary Weapons. To learn more about Legendary Weapons, check our guide down below!

In order for us to make the best articles possible, share your corrections, opinions, and thoughts about 「Weapons Guide: List of All Weapons | Assassin's Creed Valhalla」 with us!