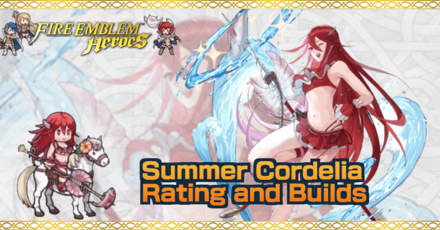 This is a ranking page for the hero Cordelia - Knight Paradise from the game Fire Emblem Heroes (FEH). Read on to learn the best IVs (Individual Values), best builds (Inherit Skill), weapon refinement, stats at Lv 40, and more for Summer Cordelia.

Firesweep Lance and Life and Death will greatly increase her offensive power while simultaneously allowing her to prevent enemy counterattacks. With the Heavy Blade seal, she will be able to speed up her special cooldown count when her Atk exceeds that of the foe, making Galeforce trigger more frequently to grant her that additional movement.

Summer Cordelia's Exclusive Weapon currently cannot be refined. This section will be updated if it becomes refinable in the future.

Summer Cordelia is a close physical attacker (range = 1). Therefore, when not accounting for the Weapon Triangle, the amount of damage she deals will be equivalent to her Atk minus the foe's Def stat.

Strong in the Player Phase

Shell Lance+ grants Cordelia +2 to all stats when she initiates combat. Additionally, Sturdy Blow 2 grants her +2 Atk/Def when she initiates combat. This makes her a bit better in the player phase compared to the enemy phase. Take note that this means that she gets +6 Def whenever initating combat. This makes her a great match-up against physical units, as she can take the counterattacks pretty fairly.

Dull Close 3 neutralizes the bonuses of the foe if they are a melee unit. Even if Summer Cordelia has low defenses, Dull Close makes her deceptively durable against units that rely on buffs like the Fortify and Rally archetype buffs.

Summer Cordelia takes 1.5x damage from cavalry-effective weapons like Ridersbane, and one blow from this type of weapon is sure to take her down. Make sure you know what weapons you are up against before hopping too far into the line of battle!
Heroes with Effective Skills

Should you Unlock Potential for Summer Cordelia?

Cordelia - Knight Paradise Only Appears as a 5 Star Hero!

Summer Cordelia as a Source Hero

How to Get Summer Cordelia / Illustrations / Voice Actor / Quotes

How to Get Summer Cordelia

Summer Cordelia is a limited time Hero who can be pulled from a Special Heroes Summoning Event. They do not appear in regular summons.

Register as a member and get all the information you want. (It's free!)
Login
Opinions about an article or post go here.
Opinions about an article or post
We at Game8 thank you for your support.
In order for us to make the best articles possible, share your corrections, opinions, and thoughts about "Summer Cordelia Builds and Best IVs" with us!
When reporting a problem, please be as specific as possible in providing details such as what conditions the problem occurred under and what kind of effects it had.