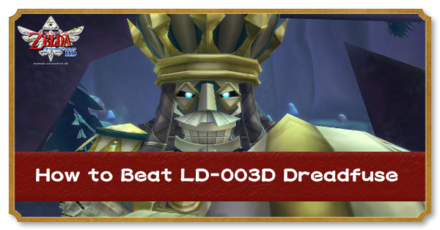 LD-003D Dreadfuse is a mini-boss that players will encounter in Sky Keep. Similar to the fight with LD-002S Scervo, players will want to avoid horizontal and vertical slashes.

Attack With a Thrust Attack

Players will want to focus on using a flurry of horizontal and vertical slashes, and thrust attacks. With each landed attack, LD-003D Dreadfuse will be pushed further and further back.

Landing an attack has a chance to stagger(put the enemy on its back foot) LD-003D Dreadfuse, which leaves it open to more attacks.

Do not use an Iron Shield

LD-003D Dreadfuse attacks with electricity. The Iron Shield is weak against electricity so even if players block or Shield Bash an attack they will still take damage.

When LD-003D Dreadfuse Covers Itself With Electricity, Wait it Out

In certain situations, LD-003D Dreadfuse will cover itself with electricity. If players attack during this time they will get shocked and take damage. The best thing to do during this time is to just wait it out.

Register as a member and get all the information you want. (It's free!)
Login
Opinions about an article or post go here.
Opinions about an article or post
We at Game8 thank you for your support.
In order for us to make the best articles possible, share your corrections, opinions, and thoughts about "LD-003D Dreadfuse Locations and How to Beat" with us!
When reporting a problem, please be as specific as possible in providing details such as what conditions the problem occurred under and what kind of effects it had.