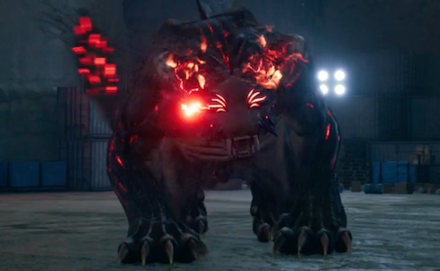 This is a guide to beating the Boss Type-0 Behemoth in the game Final Fantasy 7 Remake (FF7R). This article explains Type-0 Behemoth's attack patterns, weaknesses, and tips and strategies for defeating it both on Normal and Hard mode.

Where to Find Type-0 Behemoth 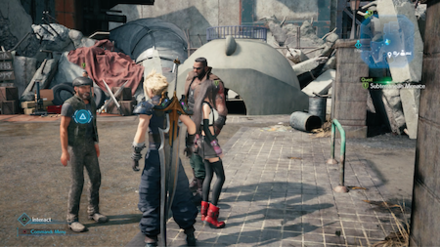 Type-0 Behemoth is fought as part of the Subterranean Menace Odd Job in Chapter 14. In the first part of the Chapter, head to Evergreen Park and talk to Wymer. This will unlock the Quest, and you'll be able to head into the nearby tunnel, at the end of which Type-0 Behemoth will be waiting.

Variant form of the behemoth. They are bred and raised as Shinra lab specimens and other monsters quake in fear at the sound of their roar.

Cripple and knock down its upper or lower body. While one is knocked down, do the same to the other to stagger the beast. It will counter if attacked with spells while its horns are intact.

No Enemy Skills can be learned from Type-0 Behemoth.

Aerith will be missing from the party at this point, so make sure you have one of the other characters take over the healer role for this fight. You'll need a healer – trust us! 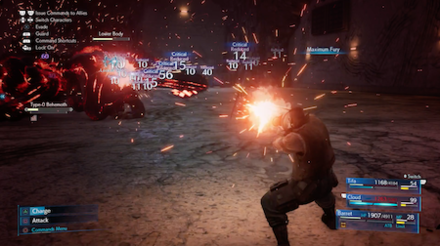 Using melee attacks against Type-0 Behemoth is frustrating, as it moves quickly and it can be difficult to predict when it will attack. It's best to use Barret to keep a distance while continuing to attack.

When Type-0 Behemoth turns around to face you with its Horn, the Horn will block all attacks that go past it, so switch to another character on the opposite side to continue attacking Type-0 Behemoth from the rear.

Attack from the Rear 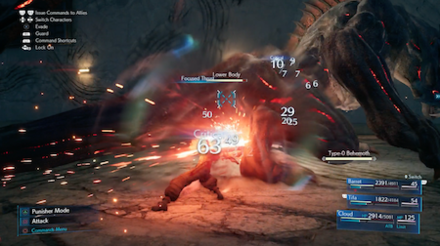 For the majority of the battle, the Horn will be immune to all damage. You'll have no choice but to attack the Upper and Lower Body first, and when you face it to attack from the front, your attacks will often accidentally strike the Horn and be wasted.

Your energy is best spent focusing on attacking from the rear, and crippling its Lower Body first. This will immobilize it, allowing you easier access to target the Upper Body directly without its Horn getting in the way. When it turns around and faces you with its Horn again, switch to a different character behind it to continue attacking from the back. 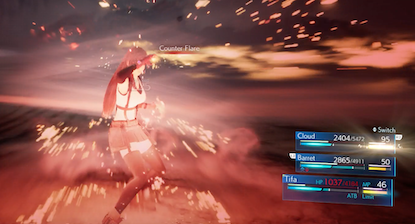 Type-0 Behemoth's Horn has a built-in defense system – when you attack any part of its body with offensive Magic, it will strike back with the powerful Counter Flare.

That said, it is possible to block and absorb the damage from Counter Flare, so if you're willing to make the trade-off, it's still possible to use offensive Magic to damage the Upper and Lower body. Just be warned that you won't get off scot-free.

Once you've knocked out the Horn, you'll be able to pelt Type-0 Behemoth directly with offensive Magic without consequences. That said, this won't occur until the very end of the battle, and the Type-0 Behemoth won't have much health left after its Horn is gone, so there's not much point saving up your MP just for this. You're best off equipping Materia that will help with physical attacks, support, healing, and especially Poison.

Use Poison for Consistent Damage 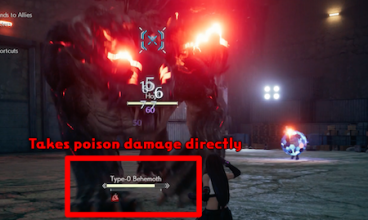 Although Type-0 Behemoth's main body will take damage during the battle as its parts are attacked, it's not possible until the very end of the fight, after the Horn has been knocked out, to directly target Type-0 Behemoth itself. However, by inflicting Poison on its Lower or Upper Body, it's possible to deal Poison damage to Type-0 Behemoth directly.

By wearing it down by keeping it consistently poisoned throughout the fight, players can reduce the number of times they need to defeat the Lower and Upper Body, and bring the fight to an earlier than expected end.

How to Get the Poison Materia

Set Up Barrier on your Party 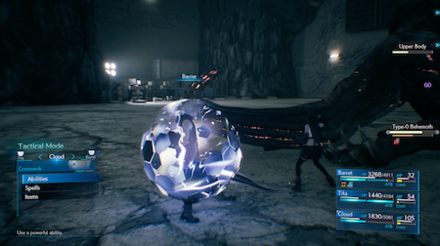 Assuming you don't cast offensive Magic, causing it to respond with Counter Flare, Type-0 Behemoth will attack you strictly with physical moves. This means that your Barrier can do double-duty protecting you from all its attacks. Use Materia like First Strike and ATB Boost to get your ATB Gauge filled from the start of the battle, and set up Barrier on your whole party early to reduce the amount of time you'll need to spend healing everyone as the fight continues.

Watch Out for its Body Slam 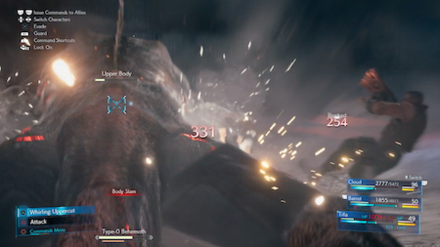 After Type-0 Behemoth has been crippled, it will fall over and appear to be completely vulnerable, but stay on your toes. The Behemoth will get up on its feet for a moment, then slam down hard on your attacking party members. When you see the Body Slam Ability name appear, get out of the way stat! 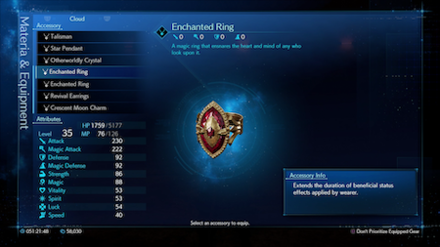 If you've got the Steal Materia on one of your party members, you can nab a rare Enchanted Ring from this boss. Give it a go if you've got a spare ATB charge!

Cloud and Tifa Will Be Dishing Out the Damage

You will be mostly using Cloud and Tifa in this fight. Cloud to cripple the upper and lower body with Tifa breaking the Horn during stagger. Tifa can also be used if you have trouble hitting the Behemoth as long as you have Parry materia equipped on her.

Barret will mostly be doing healing and revival as he has the most HP and will probably live the longest. You can occasionally use his ATB to use attacks like Maximum Fury to help criplle the body parts.

Always Have Barrier and Haste Up on Your Party 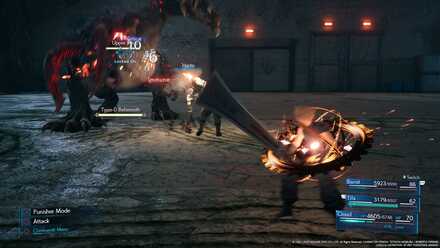 With how much Physical damage Behemoth puts out you will want to always have Barrier up as much as possible. You will also want to keep your damage output up and Haste will exactly do the trick. Have at least one of them on two different characters to spread out the MP consumption.
How to Get the Time Materia

Keep Poison Up on Behemoth 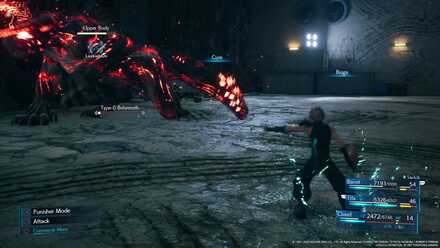 Even with offensive spells not affecting Behemoth you can still deal consistent damage with Poison spells. This fight can be long but having Behemoth posioned for most of the fight can shorten it. It will retaliate right away so watch out for Counter Flare!

Parry on Tifa Will Let Her Keep Up 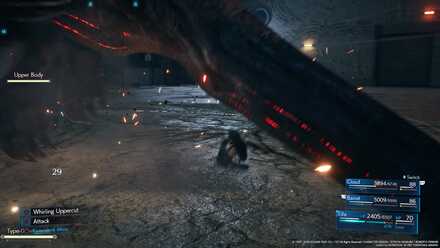 Counterstance When Behemoth is Enraged 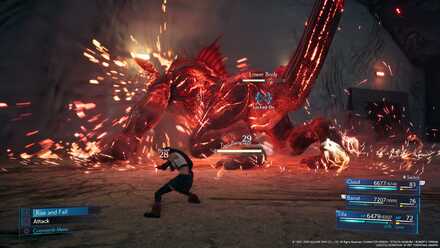 After Behemoth uses Rampage it will be more aggressive with its offense. You will want to use Counterstance to continue dishing out damage while minimizing the damage your receive. Having Counterstance in your Battle shortcuts will help you activate it in clutch situations. But be careful as it has some attacks that can not be countered! 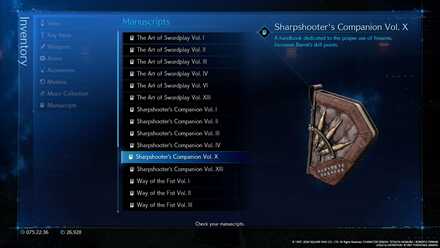 Overcoming the challenge of beating the Behemoth on Hard Mode will net you the Manuscript: Sharpshooter's Companion Vol.X. Giving you more SP and bringing you closer to getting all the weapon upgrades for Barret! 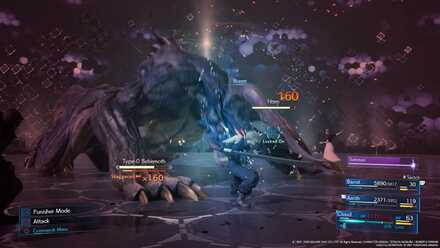 Beating Behemoth is hard enough, but beating it while having to beat other legendary monsters to get to it is even tougher! But with our guide on the Shinra Combat Simulator battle challenge Three Person-Team vs. Monsters of Legend, you can beat the Behemoth and any other monsters that gets thrown at you!
How to Beat Three Person-Team vs. Monsters of Legend

In order for us to make the best articles possible, share your corrections, opinions, and thoughts about 「How to Beat Type-0 Behemoth | Boss Fight Guide (Normal & Hard Mode) | FF7 Remake」 with us!