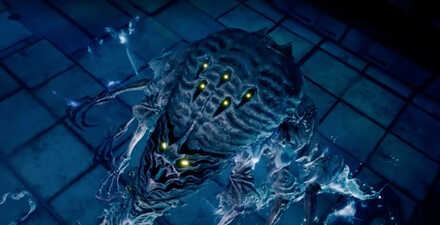 This is a guide to beating the Boss Ghoul in the game Final Fantasy 7 Remake (FF7R). This article explains Ghoul's attack patterns, weaknesses, and tips and strategies for defeating them on both Normal and Hard Mode.

An aggregate of ghosts. The large amounts of baleful energy that results from this aggregation allow it to use telekinesis.

No Enemy Skills can be learned from Ghoul.

How to Pressure the Ghoul

Damage and Stagger Dealt While in Ghost Form

Nothing new for abilities in this fight, however the damage dealt and frequency of the attacks is increased so be careful.

You want to have Aerith doing the most with her strong magic abilities until the Ghoul goes into its Physical form where Cloud and Tifa will shine the most. Rotate as necessary.

The Ghoul will alternate between two forms, Physical and Ghost. While in its Physical form, it will be blue, and in Ghost form it will be red. While in Physical form it is immune to magic damage and in Ghost form immune to physical attacks. Target it with Cloud and Tifa while in Physical form until it uses Incorporeality to switch to Ghost form, then hit it with your strongest fire spells to quickly get it to switch back. If you hit it with enough magic attacks it won't be able to use its Phantasmic Flurry attack that will silence you.

Weak to Healing in Ghost Form

While the Ghoul is not typically weak to healing like Ghosts are, when it uses Incorporeality and switches to Ghost form, it will take damage from healing. Using a Phoenix Down on it in Ghost form will also immediately make it revert back to Physical form.

Stay Away From the Blue Fire 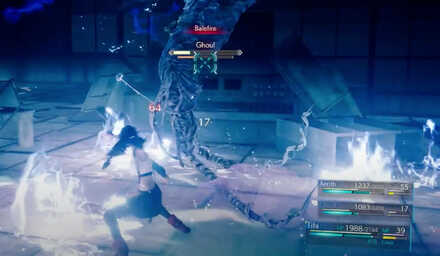 In the second phase, the Ghoul will begin to cast Balefire from time to time. This will cause blue flames to appear on the ground around it that can deal enough damage to KO a character if they aren't at full health. Walk around these as carefully as you can when attempting to get close to the Ghoul.

With the Ghouls changing forms constantly, it is a good idea to have Cloud have both Physical and Magical damage to be able to deal with both forms. Cloud's signature Buster Sword will be a good weapon for this fight.

Aerith can deal tons of damage with one spell if built offensively. Equip her with Mythril Rod and Circlet and you will be seeing big numbers when you deal damage with your spells!

Guard or Avoid Its Flame Attack

When the Ghoul unleashes its flame attack on hard mode it can hurt pretty bad. When you see the Ghoul raise its arms over its head, be prepared to guard or dodge away. There are also times where it will use this move directly after Telekenesis, so be prepared to heal.

Use Curaga While it's in Ghost Form

As in normal mode, while in Ghost form it is weak to healing magic or items. To take full advantage of this, have Aerith cast Curaga on the Ghoul for massive damage. Arise will deal damage as well, but Curaga hurts more and costs less MP.

Play it Safe During Balefire

When its HP gets low it will begin to use a combination of Balefire, Telekenesis, and its flame attack, giving you less freedom to maneuver the battlefield safely. Getting hit by any of these attacks will take out a large chunk HP, so try to go for the small openings after Piercing Scream or its flame attack to lay on the hurt.

In order for us to make the best articles possible, share your corrections, opinions, and thoughts about 「How to Beat the Ghoul | Boss Fight Guide (Normal & Hard Mode) | FF7 Remake」 with us!