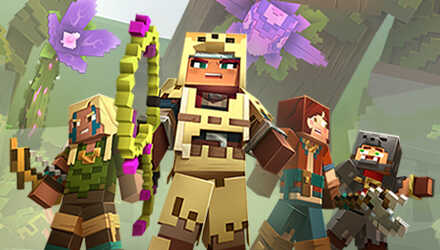 Mojang has announced their plans to update Minecraft Dungeons to keep people playing and enjoying the game. This page has information on all the updates that have already been released!

Unfortunately for players, crossplay is still not included even now after all these updates. Crossplay was promised in a free update before the launch of the game, so we're sure Mojang is hard at work adding it to the game!

The long awaited Jungle Awakens DLC has finally been released and with it a free update for those without the DLC! The free update contains a new secret level and balance changes! Everything you need to know about the update below!

Another update filled with bug and crash fixes, but this time for Xbox One and Windows! The changes are detailed in the patch notes below!

The first update for Minecraft Dungeons. It contains bug fixes and crash fixes for Xbox One and Nintendo Switch. More details in the page below!

Register as a member and get all the information you want. (It's free!)
Login
Opinions about an article or post go here.
Opinions about an article or post
We at Game8 thank you for your support.
In order for us to make the best articles possible, share your corrections, opinions, and thoughts about "All Minecraft Dungeons Updates" with us!
When reporting a problem, please be as specific as possible in providing details such as what conditions the problem occurred under and what kind of effects it had.