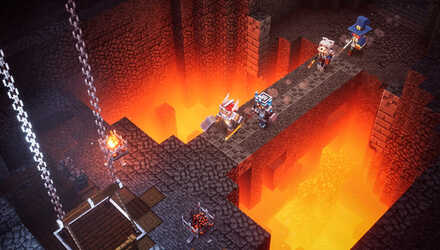 This page has information on the platforms you can play the game Minecraft Dungeons on. Read on to learn what consoles it available on and if it is on Mac and mobile!

With the PS4 being the most popular console, even Microsoft knows they will have to release it on this platform for the sales. Play with friends on your couch or play online with PSN!
How to Download on PS4

Minecraft Dungeons being available on the Xbox comes as no surprise to anyone. With Minecraft being Microsoft's biggest selling game, they will no doubt also make it available on their console. It is also among the games you can play with an Xbox Game Pass!

The Nintendo Switch is becoming more popular every year. Microsoft would be a fool not to release this co-op heavy game on a console like the Switch. Play Minecraft Dungeons anywhere with anyone on the Switch!
How to Download on Nintendo Switch

And the last platform is where it all started. Minecraft Dungeons has to be on the PC. With its predecessor being one of the best selling PC games of all time, Minecraft Dungeons will try and follow in its steps. And if you have an Xbox Game Pass Ultimate membership you can enjoy it on both PC and Xbox!
How to Download on Windows

Is Minecraft Dungeons on Mac or Mobile?

Is Minecraft Dungeons on Mac?

Unfortunately, Minecraft Dungeons is not available on Mac. There has been no word of a release on Mac on the future either. Check back for more details as soon as a Mac port of the game is announced!

Is Minecraft Dungeons on Mobile?

Minecraft Dungeon would be really cool on mobile! But just like Mac, it is unfortunately not available on that platform either. Maybe in the future, but for now, we will have to settle with the platforms above.

Register as a member and get all the information you want. (It's free!)
Login
Opinions about an article or post go here.
Opinions about an article or post
We at Game8 thank you for your support.
In order for us to make the best articles possible, share your corrections, opinions, and thoughts about "Available Platforms | Is Minecraft Dungeons on Mac?" with us!
When reporting a problem, please be as specific as possible in providing details such as what conditions the problem occurred under and what kind of effects it had.