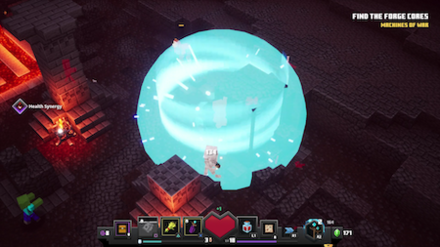 The Harvester Artifact in action.

Artifacts can make or break a build in Minecraft Dungeons. When your weapons won't cut it, learn which Artifacts you can pull out as your trump card to handle any threat!

These Artifacts serve as a third weapon, giving you an extra option when your two primary weapons can't quite pick up what the enemies are laying down. 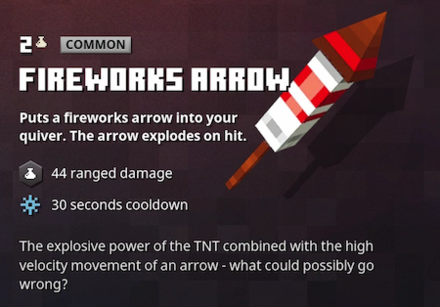 The classic Fireworks Arrow holds its value from the tutorial level through the entire first half of the game. While your stronger bows can't shoot fast enough to handle swarms of enemies, and faster bows can't back their speed up with damage, Fireworks Arrow handles both situations with an explosion that can both topple powerful foes and wipe out a wave of grunts.

Its major drawback is its long cooldown period, so it's best paired together with Armor like the Evocation Robe which has the effect of lowering artifact cooldown time. 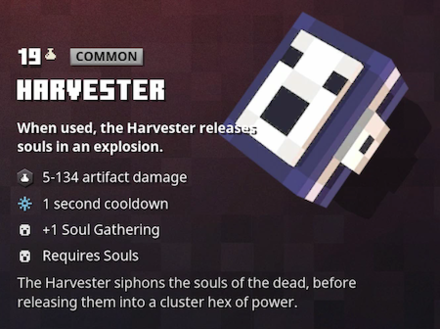 The melee, Soul-based version of the Fireworks Arrow, the Harvester allows you to either rush into a crowd and deal massive damage all around you, or get out with your life when you're swarmed by enemies. It has the disadvantage of requiring you to stand in the middle of the fray, but as its explosion has a wider range than the Fireworks Arrow, it tends to deal more overall damage.

The Harvester requires Souls to function, which can make it much easier to use than an Artifact with a standard cooldown when your build is based around Souls. Weapons with Soul Gathering like Soul Knife will help Harvester's power max out, making it all the more deadly.

These Artifacts will heal your character or otherwise make it difficult for enemies to lay down the finishing blow. 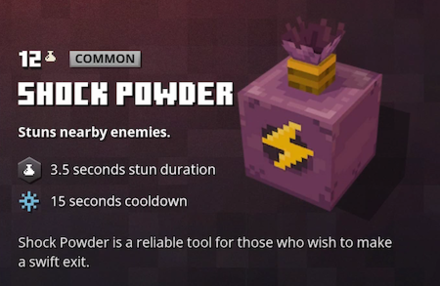 The Shock Powder's effect is mild compared to explosive Artifacts like Harvester, but it's a reliable one with an effect useful for both offensive and defense. As implied in the description, it's great for getting out of a situation when you're surrounded, but it can also be used to give yourself an extra push to knock out a group of enemies.

Compared to the Wind Horn, its cooldown period is a bit longer, but it's worth it as it takes enemies considerably longer to recover from. 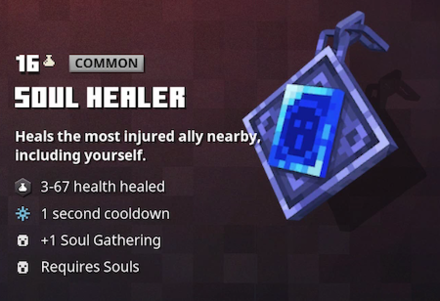 The Soul Healer has the advantage of running off Souls, which spares it the binary of a cooldown time. Even if you've only collected a few Souls since you last used it, you can continue living off tiny health boosts when you're in a tight spot, while other healing items may be in cooldown and unusable when you most need them.

The downside of the Soul Healer is the same as its upside – you need Souls to use it, so if you're low on health and there's no wimpy enemies to take out, you might not be able to pull it off. It's best used in situations like Boss Battles where hordes of standard enemies continually rush you, providing a constant source of Souls.

Keep in mind that when playing in a multiplayer setting, the Soul Healer will heal other players instead, so its usage changes a bit, but it can still be used primarily on yourself if your health is the lowest in your party.

Support Artifacts are used to back up other strategies, benefitting your character in other ways beyond simple attack and defense. 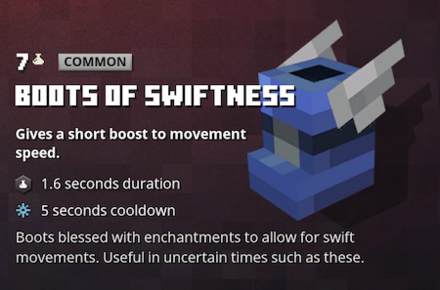 The Boots of Swiftness are not just fun to run across the map with – they're also great for dodge-and-run heavy builds. Turn on the Boots when you're about to head into a fight, then dash and dodge around taking out enemies one by one. Great for handling ranged enemies who don't do well at close range. And with only 5 seconds of cooldown, you can keep them going throughout the battle with high consistency. Use the Boots to get through! 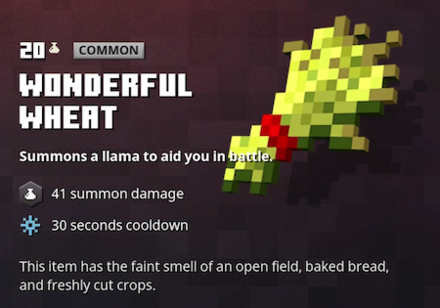 The Wonderful Wheat summons a Llama to fight alongside you, a Pet who holds its own without a doubt. The Llama will spit at foes, dealing ranged damage and hitting from a distance, unlike other familiars who run into the fray and get hurt themselves.

It can also act as a damage shield while enemies focus their attacks on it. This can be a great ploy for a ranged build, allowing you to fire at ranged enemies while they're too busy hitting the Llama to shoot back. And as the Llama depends only on its cooldown time, there's not much worry about its health running out, and you'll be able to quickly summon it again to keep holding the line.

>>5 I take back what I've said. Golems are the way to go! They got a strong knockback, even zombie can't touch it.

>>4 when you get to the last difficulty and got a golem, you'll think about what you said here haha.

Register as a member and get all the information you want. (It's free!)
Login
Opinions about an article or post go here.
Opinions about an article or post
We at Game8 thank you for your support.
In order for us to make the best articles possible, share your corrections, opinions, and thoughts about "Best Artifacts for Early Game" with us!
When reporting a problem, please be as specific as possible in providing details such as what conditions the problem occurred under and what kind of effects it had.