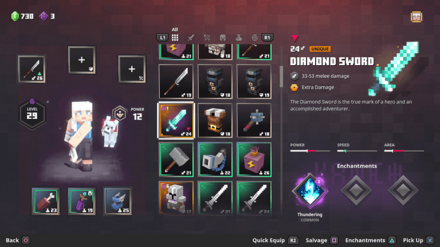 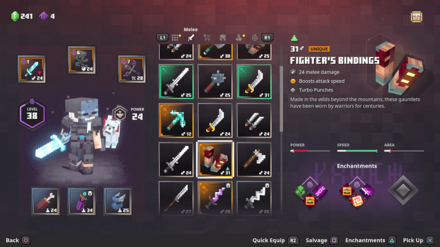 This has to be one of the best melee weapons that can make use of the stronger Enchantment effects.

Being a Gauntlet with an innate Rampaging effect means that Fighter's Bindings is easily has the highest attack speed of all Melee Weapons in the game!

Even if you use chance-based Enchantments, you can be sure they will constantly be activating with your attack speed. 30% might seem low, but if you're dealing out 6~8 punches per second, you're bound to see sparks fly!

The only weakness this weapon has is its very limited attack range. We recommend having Enchantments, Artifacts, and/or Armor that can keep you alive or effects that affect multiple mobs. 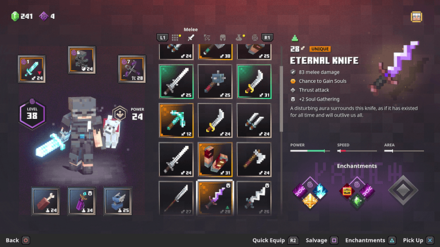 This is a great weapon to have when going for a Soul Build. Its attack speed is slow, but it can help you gain more souls faster. It's strongest against groups of mobs. With this weapon equipped you'll get max souls in no time!

However, the very slow attack speed means that it can be tough for chance-based effects to activate. You will want Artifacts or Enchantments that either help with that issue, or have a non-chance-based effect.

And of course Artifacts that use Souls work super well with the Eternal Knife! 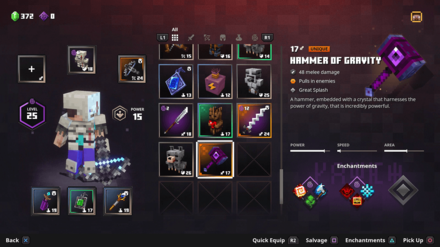 This is one of the best high damage weapons. Its Gravity effect is amazing against groups of mobs and can let you clear whatever is front of you with ease.

As it is a hammer it can be slow, so it is not great with Enchantments that have proc chances. Its gravity effect is also not effective against single targets. 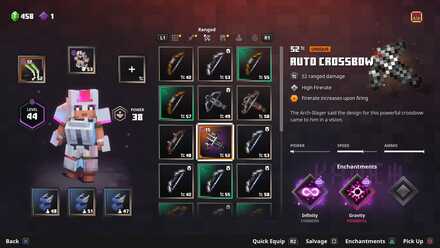 This is without a doubt the fastest firing ranged weapon in the game. The longer you fire the faster it fires. It can deal tons of damage in a single target when focused on.

Its fire rate can also pose a problem when it comes to ammo. Having the Enchantment Infinity is recommended to counter this weakness and get the most out of this beast! 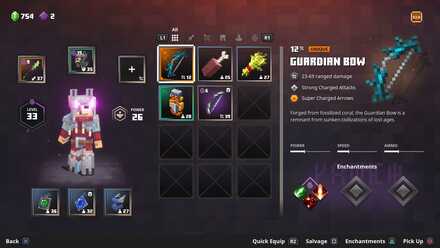 This bow can deal a lot of damage and has increased pushback when charged up, making it a great ranged weapon for dealing tons of damage to a single target.

The downside to this weapon is that you need to stand still to charge your shots, making you unable to move around freely, so large mobs of enemies can easily overwhelm you.

You will have to either slow the enemy or increase your speed for a hit-and-run tactic to make it truly shine! Another way to cover its weakness is to give it Enchantments that let it hit multiple enemies. 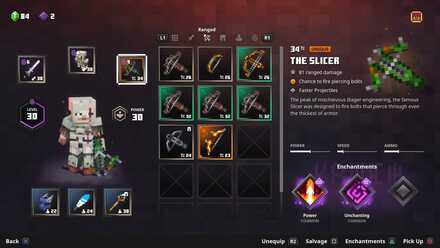 This crossbow does not have as much damage output as a Heavy Crossbow, but it can fire much faster, which in turn gives its innate Piercing ability more chances to activate! Combined with the right Enchantments, this crossbow can be extremely deadly.

It's not as effective against lone, strong enemies with its low damage, however, so you will want a strong melee weapon to cover that weakness!

The Slicer Stats, Effects and Location 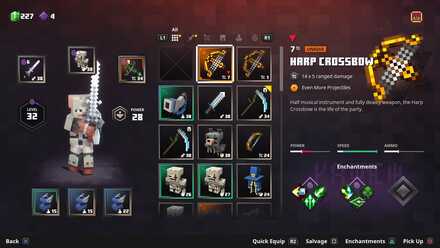 This crossbow is very effective against large groups of mobs. The more there are, the greater the potential damage it can inflict! It can clean up crowds of enemies with ease when it activates any of its Enchantment effects. It can fire up to 5 arrows in one shot with its Scatter effect.

Against single target enemies it can still be very effective. But you will need to be up close and personal to hit all your arrow shots to maximaze your damage.

>>5 Yah. The game is a player-friendly. Auto-aim feature baby!

Register as a member and get all the information you want. (It's free!)
Login
Opinions about an article or post go here.
Opinions about an article or post
We at Game8 thank you for your support.
In order for us to make the best articles possible, share your corrections, opinions, and thoughts about "Best Weapons" with us!
When reporting a problem, please be as specific as possible in providing details such as what conditions the problem occurred under and what kind of effects it had.